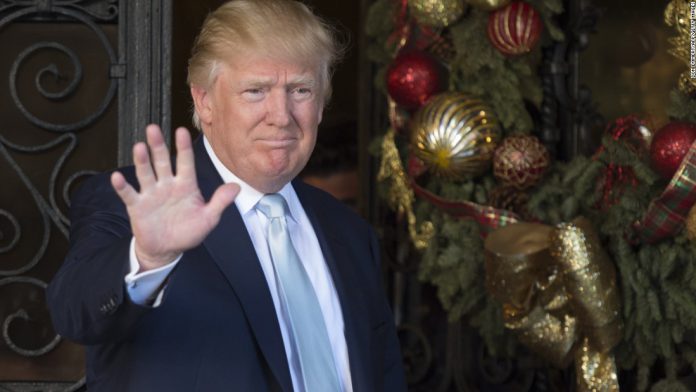 For most of 2016, Donald Trump had only his own personal credibility in his hands as he campaigned for the presidency. Now that he has the prize, his decisions and conduct will affect millions of Americans and the stability and prosperity of the entire world.

Here are 17 issues, questions and trends that will shape politics when the age of Trump dawns in January.

Will the new commander-in chief’s unorthodox style shatter the ceremonial conventions of the top job in global politics? Or will the heavy responsibilities of office and the life-and-death decisions he will make every day temper his unrestrained style and scattershot way of making policy and settling scores on Twitter? The reality star will shortly become the President, commander-in-chief, head of state and the face of America abroad. For all the unprecedented antics and twists of the 2016 presidential campaign, Trump has never faced such an examination of knowledge, temperament and public scrutiny.

Trump has promised to repair tortured US relations with Russia, raising expectations in Moscow and creating high stakes for his new relationship with President Vladimir Putin. There are expectations that US sanctions imposed after the annexation of Crimea from Ukraine could be lifted and the two sides will work together closely to combat ISIS in the Middle East. But both Trump’s predecessors tried to reset relations with Russia, initiatives that foundered in no small part because of Putin’s core political project of rebuilding Moscow’s lost influence at the expense of Washington’s power. Can Trump do any better?

The price for repealing Obamacare

Nothing has animated the Republican Party over the last six-plus years more than a desire to repeal the Affordable Care Act. Now the Trump administration and the GOP on Capitol Hill have the chance. But they also have the responsibility for millions of people who receive health insurance under the program. How quickly the administration manages to provide a workable alternative and whether it can preserve popular aspects of the program will dictate the political price it will pay for such a huge policy lift.

Trump, Vice President-elect Mike Pence and the picks for the top roles at the State Department and CIA lack recent experience at the very top levels of government dealing with a breaking national security crisis. Such a challenge could arise early on for instance, from North Korea’s expanding ballistic missile and nuclear program or from a terror attack. The crisis will test Trump’s unorthodox outsider approach to government and the quality of advice he gets from the national security team around him.

Feeling the heat over climate

Trump vowed on the campaign trail to pull out of the Paris climate deal. More recently, he has said he has an “open mind.” Still, the nascent administration, in personnel picks and policy, is suggesting it will repeal Obama-era regulations designed to cut US emissions. Even if Trump does not initiate the complex process of pulling out of the deal, steps his White House takes could cause the slow erosion of the agreement if the US does not live up to its commitments.

No political program is as important to Trump’s conception of himself as a great builder than the infrastructure scheme he is proposing to revive the nation’s transportation system, bridges, tunnels, electricity grid, clean water system and oil pipelines. Trump promises to tear down Obama-era regulations that he says have thwarted growth-boosting infrastructure projects. But conservatives have a long history of opposing Big Government interventions and doubt claims they reap jobs growth. This may be one area where Trump and congressional Democrats find common ground.

Trump constructed his campaign on fury among grass roots Republicans over undocumented migrants. His promise to build a wall on the southern border and make Mexico pay for it took on huge symbolic importance. How Trump overcomes the political and practical challenges over the project will help shape his presidency. His moves on expelling undocumented migrants and plans for “extreme” vetting of visitors and immigrants from Muslim nations will define his legacy on the issue that helped his presidential bid catch fire.

Trump has repeatedly mocked the Iran nuclear deal, the centerpiece of President Barack Obama’s second term foreign policy, and vowed to renegotiate it and drive a harder bargain. Since the agreement was not submitted to a hostile Congress as a treaty, Trump has the executive power to halt implementation with the stroke of a pen. However, the pact also involves European allies that are unlikely to restore sanctions on Tehran. A decision to pull out of the deal could also lead Trump onto an unpredictable path that could eventually raise the possibility of military action.

One factor that will be out of Trump’s control in 2017 but will still influence the course of his presidency will be the Democrats. The party is reeling over its defeat in November and lacks a clear central philosophy, future direction or bench of talented 2020 presidential candidates. Chuck Schumer, the incoming Senate minority leader, will be a key player in organizing resistance to the Trump agenda and defending Obama’s legacy. Whether Democrats can make Trump spend political capital to confirm his Cabinet and potential Supreme Court nominees and the implementation of his agenda will be crucial in the run-up to midterm elections in 2018.

For now, the Republican Party cannot believe its luck with the President-elect. Trump has constructed a Cabinet of conservatives that could augur the movement’s best chance to enshrine its ideas on tax, social and domestic issues since the Reagan administration. But after the first wave of reform, problems may emerge. It is not clear whether Trump is as willing to go as far as Capitol Hill Republicans on reforming entitlements like Medicare for instance. The dynamics of the checks and balances of the US political system are also likely, sooner-or-later, to draw the White House into conflict with GOP leaders in Congress.

Trump has vowed to brand China a currency manipulator on day one, could impose trade tariffs on Chinese goods and threatened to put Beijing’s most cherished red line — Taiwan — on the negotiating table. Is the new President really ready to unleash all out confrontation with America’s rising superpower rival?

The new President will inherit an economy that has spent the last eight years battling back from the brink of an averted second Great Depression. Unemployment is at 4.6 %, GDP growth was 3.5% in the third quarter. So the new president inherits a strong platform. His prescription for tax cuts that are likely to favor the rich and a purge against regulations have Republicans predicting a huge economic expansion. Yet Trump’s warnings of punitive trade sanctions against China and vow to renegotiate deals like NAFTA could mean an unpredictable year ahead for the global economy. Trump must also find a way to live up to his promises of lifting blue collar voters who have lost jobs to the technological revolution and low wage economies abroad and who helped put him in the White House.

NATO and the West

Trump’s election has caused deep disquiet in Europe and Asia because of his critiques of the US alliances that have been the bedrock of global stability since World War II. Trump has vowed to make allies in Europe and Asia to pay more for US protection. He sees the arrangements more as transactional business deals rather than the building blocks of US global power. Governments in both regions are currently struggling to work out exactly how Trump will approach them and what it means for their own security. Trump’s desire to improve relations with Russia has also rattled some NATO powers, especially those formerly in the Warsaw Pact, who are deeply worried by Putin’s revanchist territorial challenges.

No President in modern times has taken office with such an intricate web of US and foreign business arrangements as Trump. He has yet to make good on his promise to hold a press conference to explain to the nation how he will avoid potential conflicts of interests. Even if Trump does completely step away from his company, he is under intense pressure to demonstrate that his presidency is his only concern after January 20. If he fails, this could be an issue that haunts his administration and defies Trump’s ability to emerge from the most damaging controversies.

The Art of the Deal

Trump presented himself to voters as the only man able to drive a better deal for America in the world. He has vowed to stop nations like China acting in a way that he believes rips off the United States. He said his unique deal-making skills will restore what many Republicans believe is lost US power and prestige. He implied that complicated geopolitical equations that govern relations with nations like Iran, North Korea and Russia and the Middle East could be unlocked by his negotiating skills. At home, he’s already taken to intervening directly with US companies like Carrier to save jobs and Boeing in a bid to trim the costs of defense procurement. When he is President, Trump’s claims and credibility are on the line.

Is an all-out media war brewing?

Trump relishes having a foil and singled out the media as a politically profitable enemy during his campaign. There are already signs that his White House will tear up the way the presidency does business with the press. Journalists are already bracing for a contentious term with a president who calls them “dishonest” and obsessively critiques everything they do.

The last decade has been one of extraordinary political turbulence in the US with voters handing both parties the White House and large congressional majorities in wave elections shaped by deep disillusionment with Washington and establishment politicians. Trump is the culmination of that trend and won the presidency by running as the ultimate outsider who will blow up discredited institutions and business as usual in the capital. How far Trump lives up to these expectations, and how voters respond will determine how national politics evolves — not just in 2017 but in the years to come.