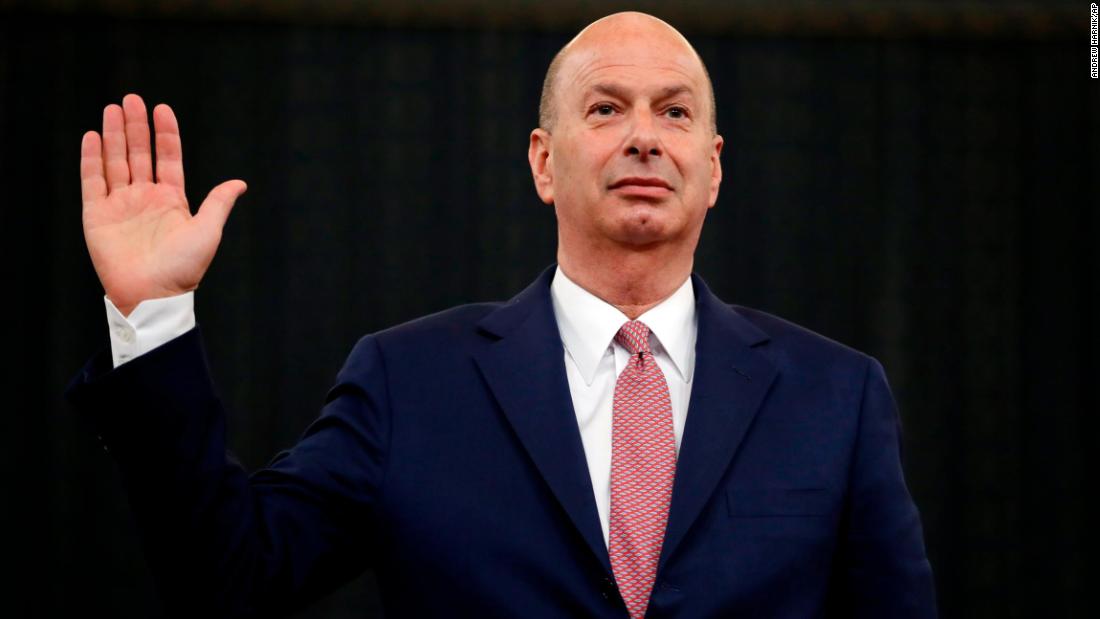 Sondland is Trump’s phone buddy who told Ukrainians on at least two occasions told Ukrainians there were preconditions for Trump’s support (either a White House meeting or security aid). On Wednesday, under oath, he picked apart his boss’ defenses.

Trump, meanwhile, said he barely knows Sondland, his own appointee to lead the US mission to the European Union. “I don’t know him very well,” Trump said. “He’s a guy that got put there.”

September 9 is the day that destroys Trump’s defense

Trump marched out to reporters on his way to Austin today and he quoted from Sondland describing their September 8 or 9 conversation. Sondland at that time asked Trump what he wanted from the Ukrainians.

Trump, per Sondland, said he didn’t want anything. No quid pro quo!

And it’s because of that testimony that Republicans say Sondland exonerated Trump.

Except the timing here is extremely important. Trump made those comments just as Congress was being made aware of the whistleblower report. And, coincidentally, it’s the day national security adviser John Bolton offered to resign, which makes me want to hear his testimony that much more.

September 9 — Trump tells Sondland “I WANT NOTHING” — and Congress is notified of whistleblower report.

Can we believe him?

Wednesday was Sondland’s third interaction with the impeachment investigators. First, in October he testified behind closed doors that there was no quid pro quo. His memory was jogged. Early in November he filed an amendment to his testimony. His memory was jogged some more and now Sondland has delivered, somewhat reluctantly, all the details Democrats craved.

That’s not the kind of consistent and even-keel testimony we’ve seen from career diplomats and civil servants heretofore.

The gaps made it quite easy for Republicans to confuse what he said. They seized in particular on his testimony about a September 9 phone call in which Trump said there was “no quid pro quo” and that “I want nothing” from Ukraine. More on that later.

In one notable moment, Rep. Mike Turner from Ohio twisted Sondland around completely.

“No only are your answers somewhat circular; frequently you’ve contradicted yourself in your own answer,” Turner told Sondland.

But that moment was equaled or eclipsed by Rep. Sean Maloney’s Q-and-A in which Sondland confirmed Trump had raised investigations personally with him, and that he now knows those to include the Bidens. And Maloney got Sondland to admit that Trump would benefit politically from those investigations.

Sondland said he resented what Maloney was doing. Then Maloney unloaded, encapsulating how frustrating Sondland was to investigators. “Now we’re here a third time and we got a doozy of a statement from you this morning and there’s a whole bunch of stuff you don’t recall, so sir, we appreciate your candor, but let’s be really clear about what it took to get it out of you.”

Question: How many people have YOU had 20 phone conversations with in two years?

Side note: Sondland repeatedly seemed frustrated that he hasn’t been granted access to all of his own official phone records. The State Department didn’t help him furnish documents to back up his testimony.

The mystery of Pence and Pompeo

They are remarkable figures in all this and prove the slipperiest creatures can float to the top.

Vice President Mike Pence denied, in a very carefully worded way, having the conversations Sondland described on the way to meeting Zelensky in Warsaw.
Pompeo should be a central figure in all this. He was on the call with Trump and Zelensky. He’s in charge of most of the witnesses, including Sondland. But he’s stayed extremely quiet. And as Democrats move toward impeaching Trump, there appears to be little or no accountability for Pompeo coming. He told reporters Wednesday he didn’t watch any of Sondland’s testimony.

Pence was sent to Ukraine in Trump’s stead in early September. He talked directly to Zelensky in person and on the phone, but hasn’t discussed those conversations. Sondland said that when they met on September 1, Zelensky point-blank asked Pence why the security assistance was being held up. Pence said he’d talk to Trump.

Pence and Pompeo, notably, are also the survivors in Trump’s Cabinet.

This is also a good place to remind everyone that Trump’s allies are not cooperating with the investigation and in fact are doing the opposite. They’re not sharing documents and they’re not showing up to testify. That means they can dismiss the inquiry as a sham, but it also means people who are paying attention aren’t hearing a side of the story that would probably be kinder to Trump.

She said her office received two emails from the State Department on July 25, the same day Trump talked to Zelensky and asked for a favor. The emails — and she did not elaborate on the exact senders or recipients — suggested people at the Ukrainian embassy may be aware of the “issue” with the aid. Separately, a member of her staff directly received a question from a Ukrainian embassy contact asking about the aid. That’s three inquiries on the day of the call suggesting Ukrainians were aware the aid may be held up. All of the requests to her office came after Trump’s 9 a.m. ET call with Zelensky.

Recall, Cooper’s office learned of the hold on July 18. She said OMB — the Office of Management and Budget — told her the aid was being held at the direction of the President because of corruption in Ukraine.

Republicans defending the President have said repeatedly that Ukrainians didn’t know the aid was being withheld. Her testimony undercuts that argument.

Pam Bondi, Florida’s former attorney general and a longtime Trump ally, popped up on CBS News this morning in her new role handling Trump’s messaging and strategy on impeachment. Strangely, she said repeatedly that Sondland was US Ambassador to Ukraine. He’s US ambassador to the EU. This may be nitpicking, but it raises questions about Trump’s defense.

One more day of hearings this week

The run of public testimony ends this week with Fiona Hill, who popularized the term “drug deal” with regard to Trump’s Ukraine policy, and David Hale, who overheard Sondland’s cellphone call at a Kiev restaurant with Trump while Hale and Sondland were dining al fresco in Kiev on July 26.

What are we doing here?

The President has invited foreign powers to interfere in the US presidential election. Democrats want to impeach him for it. It is a crossroads for the American system of government as the President tries to change what’s acceptable for US politicians. This newsletter will focus on this consequential moment in US history.

Keep track of congressional action with CNN’s Impeachment Tracker. See a timeline of events here. And get your full refresher on who’s who in this drama here.

Texas Republicans to hold in-person convention amid spike in coronavirus

Trump set for another massive event during national pandemic

Sports Gerald Ravindran - July 3, 2020
0
The Washington Redskins are likely to change their name, a source told ESPN's Adam Schefter, after the team announced Friday it will "undergo a...

'Something's got to change': How the Vikings are pushing for social justice

Sports Gerald Ravindran - July 3, 2020
0
Anthony Harris wrestled with the consequences of what he wanted to do versus the potential outcome.The Minnesota Vikings safety was on his way to...

World Gerald Ravindran - July 3, 2020
0
By October 1, that number could increase by more than 300,000.That was the headline at this week's press briefing by the Pan American Health...

Sports Gerald Ravindran - July 3, 2020
0
9:30 AM ETJeff PassanESPN CloseESPN MLB insiderAuthor of "The Arm: Inside the Billion-Dollar Mystery of the Most Valuable Commodity in Sports"Training camps around Major...