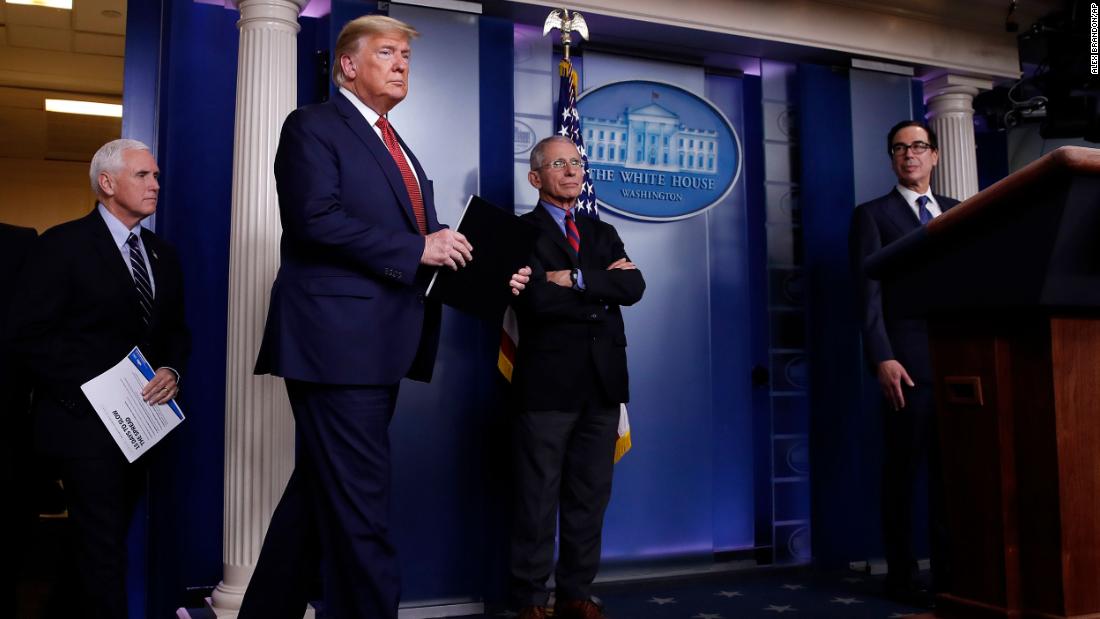 What now? Everyone has to agree in order to get this thing done quickly. Literally. That’s because the Senate needs unanimous approval in order to pass this. Bookmark that idea.

In case you haven’t noticed, no one in Washington ever agrees on much of anything. Yes, they all agree a stimulus should pass. But the details are difficult and passing it will get harder the more time people have to digest it.

Stimulus checks! — Most Americans will get some kind of help from the latest draft of this bill (it’s still a draft!). But not everyone. About 90% of Americans would be eligible for some kind of payment, according to one estimate. Read here for Katie Lobosco and Tami Luhby’s breakdown.

When will checks be mailed? Not clear. — Treasury Secretary Steven Mnuchin said the administration expects to issue them within three weeks of the stimulus package being signed into law. But seriously, probably not until May, experts told CNN. The government is not at full capacity since lots of employees are working from home. In-person tax centers, for instance, have been closed. The IRS is still going to have to calculate payments, find people and figure out how to pay them.
What if you lose your job and a one-time check is nice, but …? — The bill includes an equal amount of money — $250 billion — to greatly expand unemployment benefits, providing them to gig workers and amping up payments on four months of unemployment by $600 a week. Again, some Republican senators — starting with Lindsey Graham of South Carolina, Ben Sasse of Nebraska and Tim Scott of South Carolina — have said the bill incentivizes unemployment and they could block it. So we’ll see what happens.

More money in the bill for companies than for individuals — A lot of the help is in the form of loans and there are conditions intended to make companies keep employees on the payroll. That includes:

– $350 billion in loans to small businesses in the hopes they keep people employed.

– $500 billion in bailouts for firms, including the airline industry, companies deemed necessary for national security.

Plus there’s $150 billion in direct aid to states, although states like New York have already said they’ll need more than their chunk of that pie.

What’s else is inside? — We’re still finding out! And many lawmakers will vote on this thing without reading it all.

In the grand tradition of must-pass urgently needed bills, figuring out what’s actually in the sausage is an interesting exercise. CNN had a group going line by line through it all (or at least the latest draft). Read the full story, written by a full (virtual) reading room of people, here.

Some of what they’ve found:

– No money for the border wall

– Airlines and airports get what they wanted — That’s $32 billion in grants for airline wages, more for contractors and $25 billion in loans. This aid includes conditions that bar furloughs and stock buybacks, caps on executive compensation and more.

– Protections against foreclosures and evictions for 60-plus days — The legislation says that servicers of federally backed mortgage loans may not begin the foreclosure process for 60 days from March 18.

– Money for the arts — The draft includes $25 million for the Kennedy Center.
Where’s the money come from? — Flash back to when people were concerned about deficits and debt. Everyone in the country needs to learn right this second about Modern Monetary Theory. Print the money. Help the people.

What’s going on with the actual pandemic?

It’s still getting worse. Coronavirus patients have begun to overwhelm some US hospitals.

“Last week when I went to work, we talked about the one or two patients amongst the dozens of others that might have been a Covid or coronavirus patient,” Dr. Craig Spencer, director of global health in emergency medicine at NewYork-Presbyterian/Columbia University Medical Center in New York City, told CNN’s Anderson Cooper on Tuesday.

“In my shift yesterday, nearly every single patient that I took care of was coronavirus, and many of them extremely severe. Many were put on breathing tubes. Many decompensated quite quickly.”

Timeline — The peak of US deaths may not come for three weeks. But then it could decrease quickly.

US privately asks for foreign help

The US, overwhelmed and unprepared for a public health crisis of this scale, is now asking other countries for help. Read this from CNN’s Nicole Gaouette:

In a list obtained by CNN, the State Department lays out 25 items, telling diplomats to ask their host countries for these supplies with a clear priority on items available “today” and a secondary focus on equipment and items available in weeks.

The administration is making these private appeals as Trump is striking a starkly different note in public. At Tuesday’s daily coronavirus briefing from the White House, not long after he had called the South Korean leader, the President veered into campaign-style rhetoric, declaring that, “America will never be a supplicant nation.”

Why is Germany doing better?

We’ve seen comparisons between South Korea, which has a low number of Covid-19 deaths compared with infections, and Italy, which is very high.

Now there are similar looks at Germany.

Why have certain countries done better than others at keeping their Covid-19 mortality rates down?

Here are some educated guesses with regard to Germany from Kent Sepkowitz, a CNN medical analyst. He looks and finds important considerations about:

who is infected in various countries.

As simple as nurses? One bottom line he proposes is that the number of nurses per capita is higher in Germany and nurses are the backbone of the health care system.

Trump is as popular as he’s ever been

CNN’s Chris Cillizza has been looking at polls that show a bump in approval for Trump and how he’s handling the crisis.

On one level, this isn’t terribly surprising. Polling consistently shows a rallying effect around the president when major crises face the country. In the wake of the September 11, 2001, terrorist attacks, for example, President George W. Bush’s approval rating soared into the high 80s and low 90s. There’s a tendency for even partisans of the opposite party from the president to soften a bit in their perception of him as we are reminded of our common humanity and the need for our leaders to, well, lead us out of crisis.

On another, however, Trump’s high approval ratings for how he has dealt with coronavirus and how he is handling the job more broadly might well shock people who have been keeping close track of his and his administration’s performance on the pandemic.

After all, it’s quite clear that the administration simply didn’t take the threat of coronavirus seriously enough soon enough. And the testing capabilities for coronavirus in the US were decidedly slow. And Trump’s public statements have been marked by inaccurate claims (the test is “perfect,” the vaccine is coming fast, etc).

b) they don’t hold him personally responsible for the hiccups along the way.