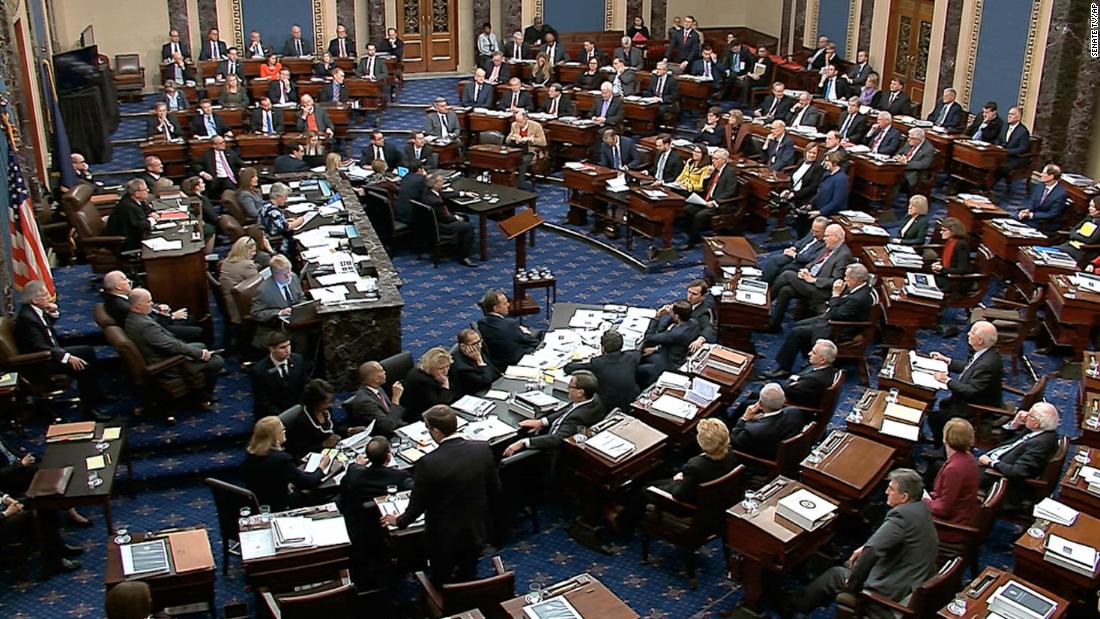 Almost zero. Republicans hold a majority in the Senate. Twenty GOP senators would have to vote with Democrats to remove him from office. It’s unlikely any will.

That’s the big question at the moment. Democrats want them. Most Republicans don’t, even if they say otherwise (see above). We’ll find out in about a week whether four Republicans needed to pass a vote to issue witness subpoenas will join Democrats and actually issue any subpoenas.

Who is paying for Trump’s legal counsel?

A variety of people, according to CNN’s White House team. Pat Cipollone, who is White House counsel, is paid by taxpayers. Jay Sekulow, one of Trump’s personal attorneys, is paid by the Trump Organization. Former New York Mayor Rudy Giuliani doesn’t take a salary.

If Trump is found not guilty, does the impeachment charge go away?

Yes, although like Bill Clinton, he will always have been impeached. Democrats could technically re-impeach Trump and try again with a fresh trial, but that probably won’t happen.

What are the similarities and differences to the 1999 Clinton trial?

That’s a big question. I’ll keep this brief. The biggest similarity for me is that in ’99 Clinton was nearly assured acquittal, just like Trump now. The differences are huge. There had been a massive years-long investigation into Clinton. The White House had turned over documents and Clinton had testified. Read more on that history here.

What is Trump doing to support his innocence?

Trump hasn’t challenged the facts around what happened in his phone call with Ukrainian President Volodymyr Zelensky last year. Rather, he and his allies say there’s nothing wrong with holding up the funds Congress appropriated and asking the Ukrainian president to investigate Joe Biden, the former US vice president and a 2020 challenger. So the interesting thing here is the facts, for the most part, aren’t in dispute. It’s a matter of whether you think the President should be allowed to do it or not.

Does the process require the President at some point?

It does not. While Clinton’s testimony was used in 1999, Trump has shown no real indication that he plans on testifying on his own behalf.

Will Trump be present in the trial?

Trump said Wednesday that he would “love” to be at his trial, but that’s very unlikely. I bet he’ll stay as far away from this as possible and continue to argue it is a sham.

What authority does Supreme Court Chief Justice John Roberts have over the impeachment trial?

He’s the judge, essentially, so he can rule on motions and objections. The difference between an impeachment trial and a regular trial is that senators can vote to overrule him. So his authority is ultimately limited.

What is the longest it could take?

There is no time limit on an impeachment trial. It will go until there is a majority of senators who want to end it. Republicans had discussed simply dismissing the charges without a trial, but they didn’t have a majority to support it. They’ll end this as soon as they can. Previous presidential impeachment trials all lasted more than a month. Trump wants his done before he delivers the State of the Union address February 4. We shall see.

Who is going to take Trump’s place if he is impeached?

Again, Trump has been impeached. That happened with the December 18 House vote, which is like an indictment. However, he’s only removed from office if the Senate votes to find him guilty of “high crimes and misdemeanors.” They will almost definitely acquit him. If, however, Trump were removed from office, Vice President Mike Pence is next in line to become President.

What are the consequences to John Bolton if he were to come forward and tell all on CNN?

He’s now a private citizen and can do what he wants. And in fact, he’s writing a book in which, presumably, he’ll tell all. It’s supposed to be published before the 2020 election.

Can Donald Trump be re-elected if he doesn’t get removed from office?

Yes. Absolutely. If a supermajority of senators voted to remove him from office, he’d be barred from further service. But that’s unlikely.

If Trump is found guilty, what sentencing can the defendant expect to receive?

This is another way an impeachment isn’t like a criminal trial. Under the Constitution, he’d be removed from office and banned from holding office in the future.

Why was it important to rush through the House and now it needs to be slowed down?

Great question! Democrats said they had to rush through the House because it was a crime in progress — affecting an election that hasn’t happened yet. But now, they want to get evidence the White House wouldn’t give them before. Trump has kept the government from turning over nearly all documents and tried to block as much testimony as he could.

What other repercussion could he face if he’s not removed from office?

That’s up to you, assuming you’re a voter. The worst thing that could happen to Trump if he’s acquitted is that he loses in 2020.

How much is this costing taxpayers?

I don’t have an answer to that. Certainly the Senate is not doing anything else during this time. And the Supreme Court won’t have the full attention of its chief justice, since Roberts is presiding daily. There are the costs of extra hours for Capitol Police and other Capitol employees. Suffice it to say this is costing taxpayers many many millions of dollars. But there’s an unquantifiable opportunity cost in other things the government is not doing.