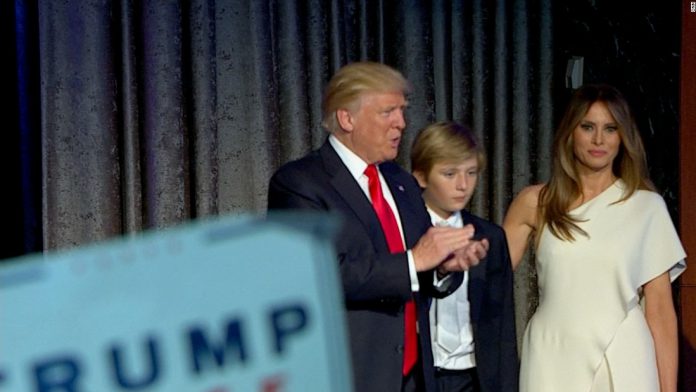 Since 1963, only presidential daughters have lived in the hallowed halls of the official presidential residence. Barron Trump will become the first since John F. Kennedy Jr., whose father was assassinated in 1963, just before his boy’s third birthday.

In an interview with CNN’s Wolf Blitzer, Kate Andersen Brower, author of “First Women: The Grace and Power of America’s First Ladies” called Barron’s move to the White House “historic”

“It’s been all daughters” she pointed out.

Barron, 10, could even end up attending the same school as Sasha and Malia Obama, the highly selective Sidwell Friends School, speculated Brower.

“The Obamas are staying here so she can finish school there. There’s a chance Barron could go there, too. There could be overlap there,” she said.

But when it comes to navigating the challenges of raising her young son in the White House, Brower said that Melania could do like her predecessors, and simply ask another first lady for advice.

“That’s what Hillary Clinton did with Jackie Kennedy” when making plans for Chelsea.

“Melania would be wise to reach back and talk to Michelle Obama and other first ladies about what it’s like raising children” she said.

Superintendent for one of US's largest public school systems has a message for DeVos: 'You can't put every kid back in a school'

Sports Gerald Ravindran - July 12, 2020
0
The NBA is back, and the back of LeBron James' jersey will still look the same.The Los Angeles Lakers' star on Saturday said he'll...

World Gerald Ravindran - July 12, 2020
0
Warsaw Mayor Rafal Trzaskowski, of the center-right opposition Civic Platform party (PO), told a rally in the city Sunday that the election had been...

Superintendent for one of US's largest public school systems has a message for DeVos:...