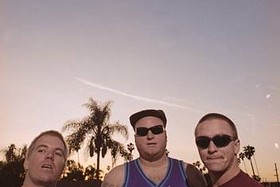 Well, craft beer brewers weren’t putting Mexican-style lagers into 40-ounce bottles until the surviving members of Sublime asked them to.

A solid two decades of radio play have etched Sublime’s sun-scorched, joint-baked, taco-eating, wave-riding culture and its reggae-ska-punk soundtrack into the global consciousness. However, it was only after frontman Bradley Nowell died in 1996 that much of the world went back into the band’s archive and discovered their first album, 1992’s “40oz. to Freedom.”

Named after the considerable amount of 40-ounce beers that drummer Bud Gaugh says it took the band to make it through the recording process, the album was released on an independent label and reissued by MCA Records later.

“They said: ‘We want a Mexican lager that gets that salt water taste out of your mouth when you come out of the ocean.’”

For the album’s 25th anniversary, Gaugh and Nowell’s widow, Troy Holmes, wanted to make a beer to celebrate the occasion. After seeing an Instagram post from a Sublime fan featuring a 40-ounce beer bottle with a Sublime sticker slapped on it, Holmes determined that any beer Sublime put its name on had to be released in a 40.

That made it a lot more difficult to find someone to produce it, as craft brewers only wanted to release pairs of 20-ounce “bombers,” while larger brewers passed for logistical reasons — but both Holmes and Gaugh learned early in Sublime’s history not to compromise. In 2000, a hard lemonade was released under the Sublime label that Gaugh said was not only not approved by the surviving band members but tasted like “donkey piss.”

“I didn’t think about it 22 years ago, but after Brad passed away, I walked into a Virgin Records store and there was this huge sun on the wall because the self-titled album had posthumously gained so much attention after Brad passed away,” Holmes says. “Universal was pushing the self-titled album and there was this huge sun, and that was painful, because I didn’t know where it came from and I wanted one and didn’t know who put that out.”

Around the same time 22 years ago, AleSmith Brewing Co.’s founders were just opening shop in San Diego. Home brewer and beer judge Peter Zien took over in 2002 and saw the brewery complete 13 consecutive years without turning a profit, but win numerous medals and fans around the world. After moving into a larger facility that allowed AleSmith to increase capacity and brew pilsners and lagers that take more time to ferment (and subsequently, more space to store), he received a call from Dave Kaplan, head of Surfdog Records in nearby Encinitas. He was representing both Gaugh and Holmes, and wanted AleSmith to brew their beer.

Soundtrack of our life

AleSmith had worked with the family of Major League Baseball Hall of Famer and San Diego Padres lifer Tony Gwynn on a beer, but had kept non-beer collaborations to a minimum. However, seeing the Southern California connection and acknowledging that Sublime “was in the soundtrack of the events in our life” in the ’90s, Zien agreed, but wanted additional input.

“We aren’t just slapping their name on this; they have to be part of this,” Zien says. “We asked them what they liked and what’s the style they like. They said: ‘We want a Mexican lager that gets that salt water taste out of your mouth when you come out of the ocean.’ ”

That wasn’t an issue. Zien says he drinks a fair amount of Pacifico and Negra Modelo, and always wanted to make a Mexican-style lager. He sent Gaugh and Holmes each three growlers of different lagers. One was too light, the other wasn’t worth mentioning, but a version with sweet Vienna malt and a color somewhere between a pale yellow Corona and a dark-brown Dos Equis Ambar fit the bill.

“We, as a band of Southern California brats, grew up surfing, going down to Baja and camping, so we were really accustomed to the Mexican-style beers down there,” Gaugh says, noting that Mexican lagers were always a backstage staple for Sublime. “That was one flavor that we all decided would represent our band the best: Something that would be palatable on a hot, sunny day and beach-worthy drinking that wasn’t too heavy. We wanted to throw back a bunch of them, basically.”

That beer also had to pass a test that most craft beers don’t: Does it still taste good after 40 ounces? A 40-ounce bottle is still a bottle, so anyone who’s drunk Olde English 800, St. Ides, Colt 45 or even 40-ounce bottles of domestic light lagers knows that the last few ounces or so can get a bit … balmy. Holmes was well aware of this going in.

Considering “craft” was once shorthand for “hand-crafted,” 40-ounce bottles of Mexican lager fit that high standard well. AleSmith ended up filling each 40-ounce bottle by hand with beer guns commonly used by home brewers. It took nine days of full shifts to fill the entire run of bottles, with crews alternating on and off after the triggers on the beer guns left them with sore wrists. They also couldn’t be capped like regular beer bottles, as 40-ounce bottles require a screw cap that’s put on with straight edges and requires a three-wheeled machine to fit the cap into the bottle’s grooves.

“I wanted to introduce this beer to a lot of non-craft drinkers who were just following the band and maybe gain them as customers, but I also know that the hardcore AleSmith fan is going to try anything we make and I didn’t want to disappoint them either,” Zien said.

Sold out in five minutes

The entire run of 40-ounce bottles sold out in five minutes. The cans, which feature Sublime’s trademark sun design created by artist Opie Ortiz, are headed toward 19 states. AleSmith is on pace to ship 3,400 barrels of Sublime Mexican Lager by Dec. 31, which is 8.5% of AleSmith’s 40,000 barrels of total production for 2017. That’s up from 28,000 barrels last year, after a recent expansion, and Zien expects roughly 68% growth in 2018 as well.

Zien says he’s only producing the amount of Mexican lager that his accounts have ordered, but he’s already looking into bigger equipment to produce more 40-ounce bottles of the beer. He has picked a distributor to take future batches of the beer down to Mexico. Holmes, meanwhile, has flat-out told Sublime fans not to open the initial run and keep them as collectibles.

“There’s still a culture that drinks those $3 40s from the liquor store, and that’s where my aim was,” Holmes says. “I didn’t aim this high, and I certainly did not see the six-pack in my vision, but I love them.”

Jason Notte is a freelance writer based in Portland, Ore. His writing has appeared in The New York Times, The Huffington Post and Esquire. Follow him on Twitter @Notteham.

John Legend to campaign for Elizabeth Warren in South Carolina

Analysis: Why Nevada could surprise us

How it's made: Backstage with Tommy Hilfiger

Sports Gerald Ravindran - February 21, 2020
0
A vote on the proposed collective bargaining agreement will go to the full membership of the NFL Players Association, even if player reps vote...

John Legend to campaign for Elizabeth Warren in South Carolina

Sports Gerald Ravindran - February 21, 2020
0
Columbus Blue Jackets leading goal scorer Oliver Bjorkstrand is expected to miss the rest of the regular season after he suffered a sprained and...

Analysis: Why Nevada could surprise us

Mangrove Capital’s Mark Tluszcz on the huge mHealth opportunity and why focusing on UX...