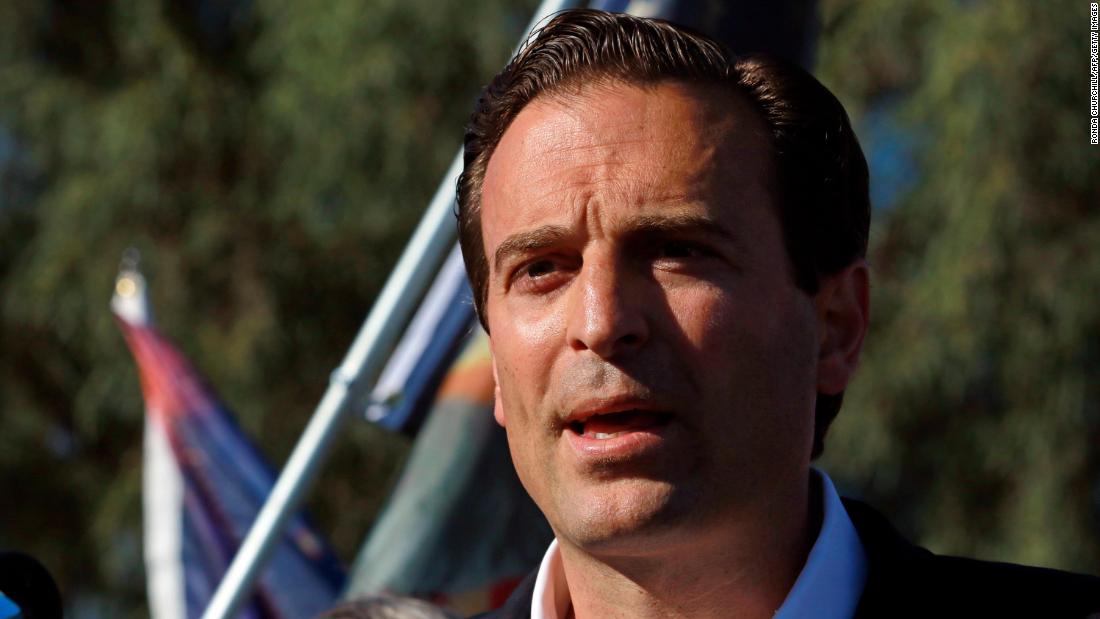 But the 2022 midterms could still deliver him the majority, in no small part because of the shifting dynamics in Nevada, a state that voted for Democrats in Senate races in 2018 and 2016 and every presidential race since 2008, including for Joe Biden in 2020.

The coronavirus pandemic has hit Nevada harder than most states. Republican chances of flipping the Senate next year are rising as President Biden’s approval ratings fall across the country. And GOP Senate candidate Adam Laxalt has done something few Republican challengers have accomplished: Unite the McConnell and Trump wings.

In an interview, Cortez Masto said her “number one focus” is to help Nevada get through the pandemic and that she understood her race will be one of the toughest next year. She said that tourists have not returned to Las Vegas at pre-pandemic levels and acknowledged that Nevada’s unemployment rate, 7.3%, is the worst in the country.

“Nevada is a purple state, and it’s always competitive,” Cortez Masto told CNN, noting she won by just two points in her first win in 2016. “Mitch McConnell sees Nevada as a top pick up opportunity. He and his allies have already spent millions of dollars against me so far.”

Asked about Biden’s low approval rating, she said people care about issues like the economy, health care, education and child care — not the President’s standing.

“When I am home, when I talk to Nevadans, it isn’t about the President of the United States,” Cortez Masto said.

Laxalt could have a number of vulnerabilities as a candidate. He lost his 2018 governor’s race after then-Republican Gov. Brian Sandoval declined to endorse him. Laxalt co-chaired Trump’s 2020 campaign in Nevada, questioned the integrity of the 2020 election and Biden’s victory in the state, and has already raised the prospect of filing voter fraud lawsuits early for 2022. There are 75,000 more registered Democrats than Republicans in Nevada.

The money has been pouring in from both sides: $9 million has already been dumped on the air, according to a media buyer involved in a race.

The Senate GOP primary is not over. Major Trump donor Don Ahern has publicly urged the former President to instead back Army veteran Sam Brown, who was severely burned while serving in Afghanistan and raised over $1 million in the third financial quarter of the year.

But Laxalt is favored to win the GOP nomination after earning the support of his party’s leaders. In August, Trump endorsed Laxalt, the grandson of former Nevada Governor and Senator Paul Laxalt, saying, “He fought valiantly against the Election Fraud, which took place in Nevada.”

Laxalt is now focused on turning his Senate campaign into a referendum on Biden’s presidency.

“With massive job losses, rising violent crime, and sky-high inflation, Nevada has experienced the failures of Joe Biden’s agenda more than any other state,” Laxalt said in a statement. “Catherine Cortez Masto enables the woke left as they lead our country into stagnation and decline.”

Laxalt added: “Nevada will be the 51st seat in a new Republican Senate majority when we defeat Masto.”

In the interview, Cortez Masto, the first Latina elected to the Senate, countered that Laxalt opposed abortion rights and the $1.2 trillion bipartisan infrastructure bill, which would inject hundreds of billions of dollars upgrading roads, bridges, transit, rail, broadband, airports, ports and waterways in the United States.

“There’s going to be a real choice in this election,” Cortez Masto told CNN.

The six Senate seats most likely to flip next year are currently held by three Democrats in Nevada, Georgia and Arizona and three Republicans in North Carolina, Pennsylvania and Wisconsin. Biden narrowly won five of those states in 2020 and lost the sixth, North Carolina, by about a point. Republicans had hoped to put New Hampshire on the map, but are struggling to find a top-tier candidate against Democratic Sen. Maggie Hassan after Gov. Chris Sununu passed.

The Democrats control the 50-50 Senate only with the tie-breaking vote of Vice President Kamala Harris. They are hoping to protect their incumbents and pad their majority by winning seats in those battleground states, including in North Carolina and Pennsylvania, where the incumbent Republicans are retiring and leaving behind messy primaries.

But Biden is unpopular heading into his first midterm election, when the party out of power typically does well, and the national environment seems to have only gotten worse and worse for Democrats over the past few months. Major surveys conducted in the latter half of November put Biden’s approval ratings among US adults in the 42-46% range.

Cortez Masto later said she would want Biden campaigning for her.

“The President is an important part in delivering everything I just talked about—from tax cuts to Nevadans and helping us overcome the pandemic,” Cortez Masto said. “And we need to continue to work together for our communities, not just in Nevada but across the country.”

Abortion access could come to the forefront of 2022 contests if the Supreme Court weakens or even strikes down Roe v. Wade, the 1973 decision that established a constitutional right to abortion, in cases next year. In 1990, Nevada passed a referendum allowing for abortions within the first 24 weeks of pregnancy, limiting the effect of the Supreme Court rulings in that state.

But Democrats like Cortez Masto will be sure to attack Republicans like Laxalt for opposing abortion rights at a time when they are threatened. “In my election, I think Nevada should be asking candidates for every office what they’ll do to protect these rights, and those who oppose reproductive rights should be held accountable at the ballot box as they have been before,” she told CNN.

Democrats argue that Biden’s polling slide is only temporary, a reflection of the country’s exhaustion with the two-year pandemic, and that their massive Build Back Better Act and new infrastructure bill will give them concrete policies to run on in 2022. (Republicans have already labeled the legislation out of control spending sprees that put America on the path to socialism.) Democrats also say they are prepared for what’s to come; Cortez Masto raised over $3.1 million between July and September, and her campaign had over $8.3 million on hand, while Laxalt raised over $1.4 million.

“We know how to win in Nevada,” said Jones. “If they think this is the seat that the majority runs through, come and get us. We’re ready to go.”

But Republicans dismiss the comparisons from a dozen years ago.

“Catherine Cortez Masto is no Harry Reid,” said Robert Uithoven, a Laxalt adviser. “And Adam Laxalt is no Sharron Angle.”

CNN’s Ariel Edwards-Levy and Morgan Rimmer contributed to this report.

Opinion: For Putin, Kazakhstan is a domino too big to fall

'It's all come together': Katie Taylor ready for biggest fight women's boxing has ever...

Sports Gerald Ravindran - January 18, 2022
0
Katie Taylor has become a game-changer for women's boxing. The undisputed lightweight champion and ESPN's No. 1 pound-for-pound fighter is on the precipice of...

Sports Gerald Ravindran - January 18, 2022
0
Sevilla's Copa del Rey exit came a day after the game started, as Joan Jordan was hit by an object thrown from the crowd...