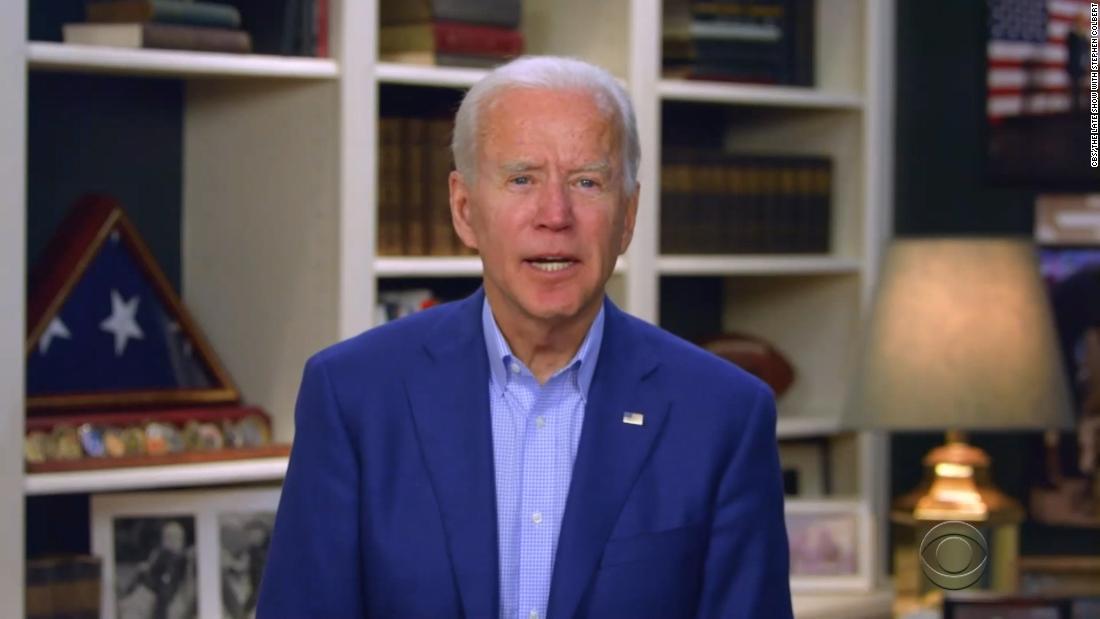 “The only way to bear this pain is to turn all that anguish to purpose. And as President, I will help lead this conversation — and more importantly, I will listen, just as I did today visiting the site of last night’s protests in Wilmington,” Biden wrote on Instagram. This is only the second time Biden has appeared publicly outside his home since stay-at-home orders were issued during the pandemic.

Videos on the candidate’s Instagram story show him wearing a mask and taking photos with men who appear to be supporters, also wearing masks.

“You gotta get that crazy guy out of office, Biden,” one man in a Delaware State University T-shirt can be heard saying in the video, referring to President Donald Trump. The group rotates to each take a photo with the former vice president. “Save us, save us. Please, save us,” he adds.

In a statement released late Saturday evening, Biden empathized with protestors, acknowledging the pain and fury caused by racial injustice, but warned that “the act of protesting should never be allowed to overshadow the reason we protest.”

Biden revealed Friday that he spoke with the family of George Floyd, an unarmed black man who died last week after being pinned down by a white police officer. The former vice president told CNN’s Don Lemon that he offered the family empathy as someone who has lived through loss and praised their courage.

“I was truly impressed with their courage and their grace during this unimaginably painful time,” Biden said.

“He didn’t give me an opportunity to even speak,” he said. “It was hard. I was trying to talk to him, but he just kept like pushing me off, like ‘I don’t want to hear what you’re talking about’. And I just told him, I want justice. I said that I couldn’t believe that they committed a modern day lynching in broad daylight,” he said.

Biden’s actions in the aftermath of the police killing stand in contrast to Trump, who critics on both sides of the aisle have said stoked tensions over protests and riots by threatening police retaliation and military intervention.

On Saturday, Trump addressed the situation in his lengthiest remarks yet on the subject.

“My administration will always stand against violence, mayhem and disorder,” Trump said during his visit to Florida for the NASA/SpaceX launch. “We will stand with the family of George Floyd, with the peaceful protesters and with every law-abiding citizen who wants decency, civility, safety and security.”

The President added, “My administration will stop mob violence, and stop it cold.”

On Friday, Trump called the protesters “THUGS” in a tweet and seemed to echo a phrase from a controversial police chief, a hardliner, in Miami. Trump write, “when the looting starts, the shooting starts.” His tweet was flagged by Twitter for “glorifying violence” and was affixed a warning label, marking the first time such action has been taken against Trump’s Twitter account.

China has just contained Covid-19. Now it's battling some of the worst floods in decades

MLB roundtable: Is the ball still juiced and other key home run questions for...

Sports Gerald Ravindran - July 14, 2020
0
Jul 13, 2020MLB InsidersESPN Among all of the unknowns heading into the shortened 2020 campaign for Major League Baseball, one of the biggest is...

China has just contained Covid-19. Now it's battling some of the worst floods in...