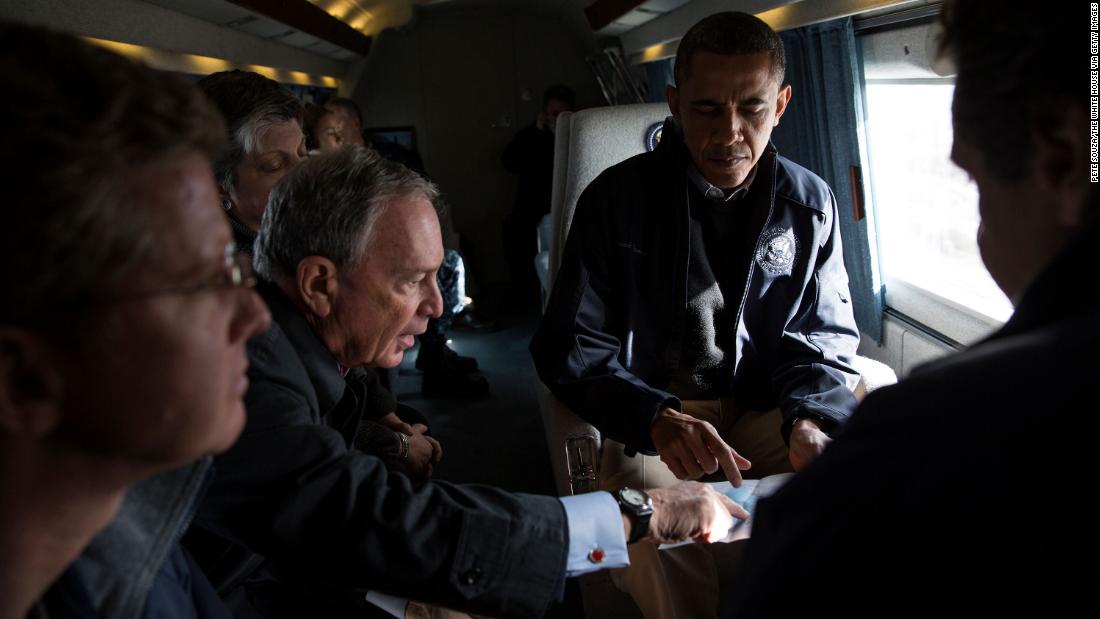 Michael Bloomberg, in particular, has spent $38 million — and counting — on two spots featuring Obama, which are airing again and again, across all channels, at all times of the day. This unprecedented amount is about three times as much as Joe Biden has spent on his entire TV advertising campaign.

“He’s been a leader throughout the country for the past 12 years,” Obama says in one of the ads, giving a glance to the former New York mayor. “Mr. Michael Bloomberg is here.”

Those brief words from Obama have played tens of thousands of times on television and repeated even more on digital ads for Bloomberg. They date back more than six years, when Obama visited a Brooklyn high school.

On that day in October 2013, the President was actually praising Bloomberg’s tenure as mayor — a point the Bloomberg presidential campaign left out of the ads.

“I want to give a special shout-out to a man who’s been an extraordinary mayor for this city,” Obama said that day. “He’s been a leader throughout the country for the past 12 years, Mr. Michael Bloomberg is here.”

Bloomberg, of course, is hardly the only presidential candidate trying to step into the glow of the former president. At least five Democratic contenders have used Obama in their advertising.

“Isn’t it amazing how everybody is Barack’s best friend now?” Biden said last week in Nevada, delivering a sarcastic laugh. “Man, look at all these ads, right? It’s amazing.”

But for Biden, the unprecedented advertising barrage from Bloomberg is hardly amusing, considering his campaign does not have the money — or anywhere close to it — to compete.

A week before Super Tuesday, when Bloomberg faces voters for the first time in this presidential race, the images alongside Obama are powerful ones. The ads show the two men meeting in the Oval Office and on Marine One, surveying damage from Hurricane Sandy in 2012.

“A great president and an effective mayor,” a narrator in the ad says. “Leadership that makes a difference.”

Through the ads, the Bloomberg campaign is hoping to make the former mayor more acceptable to black voters — given his controversy over stop-and-frisk police tactics — and trying to soften the claim Biden is making to the Obama legacy.

When asked by CNN about the ads, Biden bristles, saying: “Come on, man!”

Yet the former vice president cannot afford TV advertising to amplify his argument that Bloomberg was hardly always a big Obama admirer.

“You can spend a lot of money when you have $62 billion, but you can’t do away with your record,” Biden said, pointing out that Bloomberg criticized the Obama administration’s signature achievement, the Affordable Care Act.

So just how close were Bloomberg and Obama?

The mayor — a Republican-turned-independent — and the president found common ground on guns and climate change. But they had many policy difference — notably on Obamacare.

In a 2010 speech, just months after the law passed, Bloomberg called it “a disgrace.” He described Obamacare as just “another program that’s going to cost a lot of money.”

A decade later, as he’s running for the Democratic presidential nomination, Bloomberg has fully embraced Obamacare and supports a Medicare-like public option that builds on the same health care law he once spoke out against.

While a spokesman for Obama declined to comment on the Bloomberg ads, the spots have drawn the ire of several former Obama staffers, who have not forgotten Bloomberg’s tepid endorsement of Obama, just five days before the 2012 election.

“It was damning with faint praise to say the least,” said Dan Pfeiffer, a longtime Obama adviser. “At the time, a lot of us though, like, not endorsing would have been more constructive.”

In the op-ed published on Bloomberg News, the former mayor praised Republican nominee Mitt Romney, but said he would grudgingly vote for Obama and offered a critique of his first term in the White House.

“In 2008, Obama ran as a pragmatic problem-solver and consensus-builder. But as president, he devoted little time and effort to developing and sustaining a coalition of centrists, which doomed hope for any real progress on illegal guns, immigration, tax reform, job creation and deficit reduction,” Bloomberg wrote. “And rather than uniting the country around a message of shared sacrifice, he engaged in partisan attacks and has embraced a divisive populist agenda focused more on redistributing income than creating it.”

In a 2016 speech, discovered by CNN’s KFile, Bloomberg acknowledged the slight.

“The second Obama election, I wrote a very back-handed endorsement of Obama,” Bloomberg said. “Saying I thought he hadn’t done the right thing, hadn’t done, hadn’t been good at things that I think are important and Romney would be a better person at doing that. But Romney did not stick with the values that he had when he was governor of Massachusetts.”

The difference between the Bloomberg advertising campaign — and the other Democratic rivals — is the financial muscle behind the television spots.

As for the former President, he has not issued an endorsement and has no immediate plans to do so.

“He’s uniquely positioned to unify the party at the end of this, so appearing to interfere now would take away his ability to do so when his voice can have the most impact,” a person close to Obama told CNN. “He’s said he’ll work hard for whoever the nominee is — and that includes Mayor Bloomberg.”

Tracy Hughes, a South Carolina military veteran, said she did a double-take when she first saw the Bloomberg ads. After doing some research, she now knows Obama didn’t endorse Bloomberg — or anyone.

“I believe it’s just a ploy, to me, to use President Barack Obama — his legacy and his history — to try and win votes,” said Hughes, who intends to vote for Biden. “It’s not a good thing at all to do, because we can see right through it.”

Fact-check: Trump says some states aren't in jeopardy from the virus, denies saying it would go away by April

There are fears a coronavirus crisis looms in Tokyo. Is it too late to change course?

Politics Gerald Ravindran - April 4, 2020
0
"We are experiencing significant levels of infection at several of our facilities," Barr wrote in a memo Friday, singling out federal prisons in Louisiana,...

Sports Gerald Ravindran - April 4, 2020
0
Three years ago, Los Angeles Chargers running back Austin Ekeler was preparing for the jump of his life -- from a Division II college...

Sports Gerald Ravindran - April 4, 2020
0
Two-time Olympic medalist Michelle Kwan stood among 1,000 people in Idaho on March 7. She was supposed to be in Seattle, as part of...

A Pirate with pitch: Inside the singing career of an MLB pitcher

Sports Gerald Ravindran - April 4, 2020
0
PITTSBURGH -- Steven Brault is waiting in the wings as a trio of Broadway veterans belt out the final notes of "Being Alive," from...

How Atalanta's feel-good story became a 'biological bomb' for coronavirus in Italy, Spain

Sports Gerald Ravindran - April 4, 2020
0
At the end of their sensational and surreal Champions League elimination of Valencia in Spain on March 10, a 4-3 second-leg win (8-4 on...