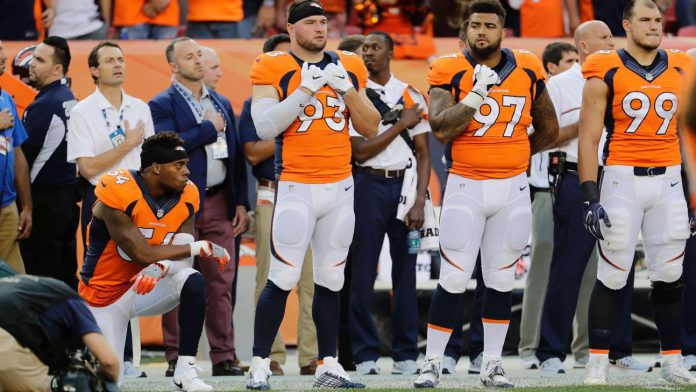 Denver Broncos linebacker Brandon Marshall said he is taken aback by the subdued reaction to the fatal shooting of an unarmed African-American man by Tulsa, Oklahoma, police compared to the outrage over NFL players’ demonstrations during the national anthem.

“One thing I have an issue with is people are really, extremely [ticked] off and mad about us kneeling and protesting peacefully. How come they don’t have that same type of anger toward the situations that are going on? I think everybody needs to check themselves,” he told The Denver Post on Tuesday.

Marshall made his comments while at a local elementary school, where he addressed students about the importance of attending school. He was asked by the newspaper about the shooting of 40-year-old Terence Crutcher in Tulsa last week.

Police video shows Crutcher walking away from the officers and toward his SUV last Friday with his hands in the air. He then approaches the driver’s side of his vehicle, where an officer shocks him with a stun gun and another fatally shoots him.

Officers had been called to the scene to respond to a report of a stalled vehicle. The officer who shot Crutcher, Betty Shelby, was placed on paid leave.

Marshall has knelt during the national anthem during each of the Broncos’ first two games and has lost two local sponsorship deals as a result of his actions. He met with Denver Police Chief Robert White last week.

“It just lets me know that we have a long way to go as people,” Marshall told the newspaper. “I don’t want to go as far as to say people care more about the flag than their fellow man, but it seems like it.”

Several NFL players took to Twitter on Tuesday to react to the Crutcher situation.

Sources: Simmons to miss time with back injury

World Gerald Ravindran - February 24, 2020
0
Fintech startup Revolut is raising a large Series D round of funding. TCV is leading the $500 million round, valuing the company at $5.5...