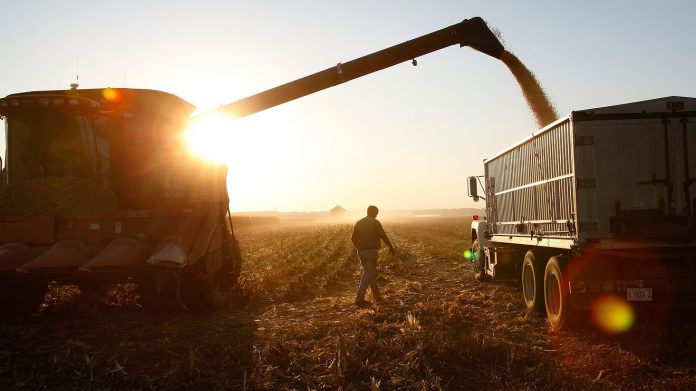 A fourth straight year of bumper corn and soybean harvests is nipping the per-bushel profit collected by farmers, and that makes the land they work worth less.

In fact, the value of “quality” farmland in the Chicago Federal Reserve’s jurisdiction fell again in the third quarter, down 3%, from last year’s third quarter. It’s the fourth straight quarter of year-over-year declines for land values in the district, which covers Illinois, Iowa, Indiana, Wisconsin and Michigan. It’s also its longest losing streak since 1986–87.

Indiana’s farmland values were up 1 percent from a year ago and Wisconsin’s were up 2 percent, while farmland values for Illinois fell 4 percent, Iowa fell 5 percent and Michigan dropped 11 percent, the Fed’s report issued Thursday showed.

“Bumper harvests should provide some protection for farmers’ revenues, but falling corn prices have pulled the rug out from beneath their feet,” said David Oppedahl, senior business economist at the Chicago Fed.

Read: Why farmland may become a more popular neighborhood amenity than a golf course

The report also looked at credit conditions for farmers in the area. For the third quarter of 2016, most of the indicators of the Fed district’s agricultural credit conditions were more negative than those of a year ago.

While the availability of funds for lending by agricultural banks remained slightly above the level of a year ago for the third quarter of 2016, the demand for non-real-estate loans relative to a year ago was a bit more pronounced than in the prior quarter, the Fed said. According to survey respondents, loan repayment rates were predicted to decline further this fall and winter.

Looking ahead, a majority of the respondents to the Fed’s survey expected farmland values to fall in the fourth quarter.

Yet a lack of available properties for sale may be playing a role in keeping farmland values from dropping faster, the Fed said.

Survey respondents expected both crop and livestock operations to struggle in terms of net cash farm earnings this fall and winter relative to a year ago. According to responding bankers, hog, cattle and dairy farmers should also expect to face lower earnings moving into winter, which would make this the second year in a row with a negative outlook for all of them, the Chicago Fed said.

In a separate report out Thursday, the Kansas City Fed reported a slow-but-steady rise in financial stress in its farm sector during the third quarter of 2016 as income in the sector remained low. The Kansas City Fed covers Kansas, part of Missouri, part of Nebraska, Oklahoma, Colorado, Wyoming and part of New Mexico.

“Persistent weakness in both the crop and livestock sectors has caused producers to expend more working capital to meet short-term financial obligations,” the Kansas City Fed’s Nathan Kauffman and Matt Clark said in the report. “An ongoing decline in farmland values and cash rental rates has accelerated slightly under prolonged pressure from falling farm income.”

The land-value news hits as the nation reacts to the stunning presidential win by Republican Donald Trump, who will govern with Republican majorities in the House of Representatives and the Senate. Trump won most largely agricultural states except for Illinois, Colorado and Minnesota.

Trump’s ag policy and trade stance remains to be seen. Farm Journal columnist John Dillard said Trump is likely to consider reversals of the EPA’s Waters of the U.S. rule, which rewrote some parts of the Clean Water Act and put more land-use decisions under federal jurisdiction, and Trump could appoint an official with greater agricultural background in charge of the EPA.

Read: How U.S. farmers would gain from the Trans-Pacific Partnership