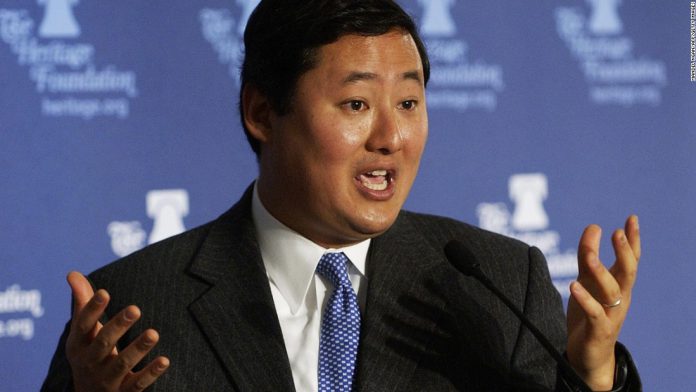 Trump’s uses of presidential power on issues such as his travel ban, ordering the construction of a border wall and his threats to kill NATO are all cause for concern, according to John Yoo in a New York Times op-ed published Monday under the headline, “Executive Power Run Amok.”

“Even Alexander Hamilton, our nation’s most ardent proponent of executive power, would be worried by now,” Yoo wrote.

Yoo worked at the Justice Department during Bush’s administration, authoring memorandums on enhanced interrogation tactics also known as the “torture memos.” He now works as a law professor at the University of California at Berkeley and a scholar at the American Enterprise Institute — and said he has monitored Trump’s actions with concern.

“During the campaign, Mr. Trump gave little sign that he understood the constitutional roles of the three branches, as when he promised to appoint justices to the Supreme Court who would investigate Hillary Clinton,” Yoo wrote. “In his inaugural address, Mr. Trump did not acknowledge that his highest responsibility, as demanded by his oath of office, is to ‘preserve, protect and defend the Constitution.’ Instead, he declared his duty to represent the wishes of the people and end ‘American carnage,’ seemingly without any constitutional restraint.”

The White House did not immediately respond to a CNN request for comment.

Yoo also knocked Trump’s executive orders to build a wall along the US-Mexico border, writing that Trump has no “constitutional authority” over border control and added that Trump can’t pull the US out of NAFTA either, because Congress made the trade deal.

Yoo said that the travel ban is constitutional, but what concerned him about it was that Rudy Giuliani “disclosed that Mr. Trump had initially asked for ‘a Muslim ban,’ which would most likely violate the Constitution’s protection for freedom of religion or its prohibition on the state establishment of religion, or both — no mean feat.”

He also wrote that Trump’s firing of former acting Attorney General Sally Yates after she disputed the ban “raises concerns.”

“A successful president need not have a degree in constitutional law. But he should understand the Constitution’s grant of executive power,” he saidd. “Otherwise, our new president will spend his days overreacting to the latest events, dissipating his political capital and haphazardly wasting the executive’s powers.”

Politics Gerald Ravindran - June 1, 2020
0
Trump's comments follow nearly a week of protests across the country that at times have turned violent over the death of Floyd, a 46-year-old...

Sports Gerald Ravindran - June 1, 2020
0
The esports world is a big place. Any given weekend, there can be more than a dozen competitions taking place worldwide, from massive events...