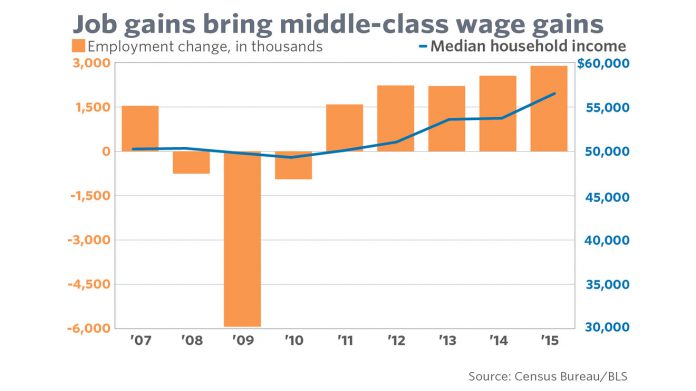 New data showing middle-class household incomes growing at the fastest rate since the recession seemed to confirm that a recovery that’s remained grudgingly slow and uneven is finally touching the lives of ordinary Americans.

Millions of Americans escaped poverty last year and incomes rose at their biggest gain ever, as the 6-year long economic recovery finally hit home for households. Median middle-class wages surged 5.2% between 2014 and 2015, the Census Department said Tuesday, the first annual increase since 2007, just before the economy plunged into recession.

Even better, the strongest gains were concentrated among lower-income groups.

The Census data was “superb in almost every dimension,” said Larry Mishel, president of the left-leaning Economic Policy Institute, on Tuesday. After such a deep recession caused by a financial crisis, incomes were “submerged” for many years, he noted. “This one year almost single-handedly got us out of the hole. That’s worth celebrating.”

EPI charted the difference between incomes for all households and for the non-elderly, or working age, Americans. Working-age households did better, Mishel said, highlighting the role the labor market played.

To be sure, incomes were helped along by stagnant inflation. If inflation had run at a more normal rate, Mishel said, incomes would have risen about 3%. And they have not yet regained the peak they set in 1999.

Also, income inequality, measured by the Gini coefficient, was unchanged from 2014 to 2015.

Still, economists were cheered by the data.

The recovery from the recession wasn't spectacular, but the important thing is that it's been persistent. Still going seven years later.

Census also reported that the number of people living in poverty fell by 3.5 million from 2014 to 2015. That took the poverty rate down 1.2 percentage points, the sharpest annual decline since 1968.

The data was released just as the Federal Reserve begins preparations for a highly-anticipated policy meeting. Several Fed officials have said in recent weeks that they feel confident enough in the economy to seriously consider a second interest rate increase at next week’s policy meeting.

But on Monday, Fed Governor Lael Brainard sounded a very dovish tone in a speech. The Phillips Curve, a relationship between falling unemployment, rising wages, and increasing inflation, may have broken down, she said, as inflation has remained below the Fed’s target for 51 straight months.

Central bank policymakers often repeat that they are “data-dependent,” meaning they rely on the economic reports released every month, and sometimes every week, to guide their decisions. The Census report is a rare look at a full year at a time.

House Democrats make their case for removing Trump from office

Virginia House Republican leader to hate groups: 'You are not welcome here'

Just like that, Conor McGregor is back in control

Sports Gerald Ravindran - January 19, 2020
0
When Conor McGregor stepped into the Octagon on Saturday night, it had been 1,163 days since he had last felt the exhilaration of having...

Moments of UFC 246: Conor at the mic, Cowboy's grandma and Maycee's stumble

Sports Gerald Ravindran - January 19, 2020
0
Conor McGregor does two things very well: He fights and he gets on the mic after fights. McGregor was in top form on both...

Who should be next for Conor McGregor, Donald Cerrone?