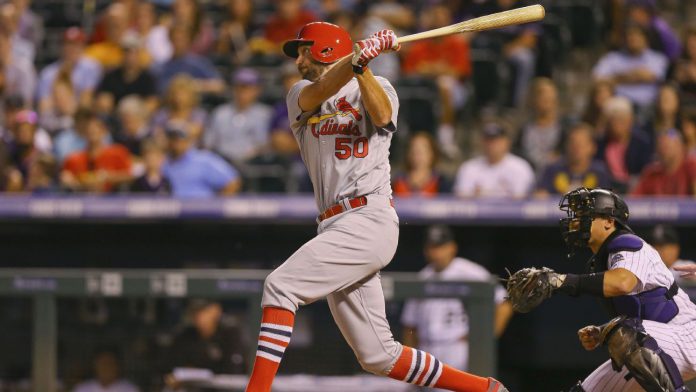 DENVER — The only thing predictable about September baseball is that it’s played in the ninth month of the year.

The St. Louis Cardinals who have been around a while know how wacky things can get late in a season. In Adam Wainwright‘s first full season, say, the Cardinals nearly choked away a huge lead before recovering and rollicking to a World Series title. He got the last out that fall. The other year he got a ring, in 2011, the Cardinals tracked down the Atlanta Braves against nearly impossible odds and won the World Series as a wild-card entrant.

And here they are again, demonstrating the unpredictability of baseball, if perhaps not quite as dramatically. On Saturday night, they were two outs away from falling four games out of a wild-card spot. Then they rallied for two runs off the San Francisco Giants‘ famously combusting bullpen, and, my, how things have changed.

After Tuesday night’s 10-5 win over the Colorado Rockies at Coors Field, the Cardinals once again can say that, if the regular season ended today, their season would not. They pulled into a flat-footed tie with the New York Mets and the Giants for the two National League wild-card spots. Just for argument’s sake, if the teams were to stay jammed up like this 11 games from now, the likeliest scenario would be a Mets-Cardinals game at Busch Stadium on Oct. 3. The winner of that game would host the Oct. 5 wild-card game. The loser of the tiebreaker would travel to San Francisco with another chance to advance.

So, yeah, the Cardinals have fought back from the brink to a pretty decent place in a span of roughly 72 hours. Asked about their dramatic uptick in fortunes — from having a 32 percent chance of playing postseason baseball to a 70 percent chance, according to FiveThirtyEight — they answered practically in unison.

“We know if we don’t stay on top of things, it could turn right back around in their favor, so we’re just going to keep showing up and trying to win games every single day,” Wainwright said.

Manager Mike Matheny’s answer was nearly identical, so you wonder whether the team had this conversation before the media was allowed into the clubhouse.

“It can change again,” Matheny said. “We control what we can control, same boring stuff, but it works for us, because it keeps it very simple what our job description is. We control ourselves. That’s it.”

The Coors Field scoreboard is one of those old-fashioned, hand-lettered kinds. It also is directly in the visiting team’s line of sight in the third-base dugout. So while Matheny might not have wanted to keep his eyes glued to it, he didn’t have much choice here, because it is directly behind the pitcher’s head. Well before Trevor Rosenthal got the final out Tuesday, Matheny had seen the Mets’ loss to Atlanta go final.

By the time the Giants’ win in Los Angeles went final, the Cardinals were already back at their hotel, or wherever they were heading in Denver after the game.

Though Wainwright is no longer the intimidating, front-of-the-rotation starter he was as recently as two seasons ago, he continues to lead the Cardinals in important ways. Every time he takes the mound, he teaches his teammates something about how to compete. If his fastball isn’t as reliably lively, his bat has never been sprier. If you slip in one area, you find another way to help beat the other team. It seems kind of simple in a way, but that doesn’t mean it’s easy.

“He’s going to keep you in the game as best he can,” Matheny said. “He’s just a warrior.”

He is having a historically good season at the plate. On April 9, Madison Bumgarner hit a home run off Clayton Kershaw. Wainwright, who is friendly with both pitchers and competes with every pitcher in baseball, texted Bumgarner that evening and followed it up with a phone call the next day. He actually wanted to elicit some hitting tips. They both came to the same conclusion: Just let it rip. Wainwright has abandoned the more timid approach that had been drilled into him — trying to take pitches the other way or simply concentrate on advancing runners — and has begun looking to do damage by pulling balls. It feels more natural. He credits Bumgarner with starting the whole process.

“If there’s somebody out there doing something better than you, you should ask some questions,” Wainwright said.

Wainwright’s four RBIs Tuesday were the most by a pitcher since Noah Syndergaard had four in a game in L.A. earlier this season. Wainwright ripped a two-run double to center field in the second inning and blooped a two-run single to center in the fifth. He has 10 extra-base hits and 18 RBIs this season, numbers that Bumgarner, who is as renowned for his dangerous hitting as his feisty temper, has never matched. In fact, Wainwright has the most RBIs in a season of any pitcher since the era of the designated hitter began in 1973.

Wainwright has two more starts to catch Bob Gibson, who drove in 19 runs in 1970, and would need to get even hotter to catch Dizzy Dean, who had 21 RBIs to set the modern Cardinals record in 1935. Per ESPN Stats & Information, Wainwright has more extra-base hits than any pitcher since Arizona’s Micah Owings had 12 in 2007.

Wainwright said he has always wanted to be known as a pitcher who could hit. He gave up the idea of being drafted as a 6-foot-7 outfielder in his senior year of high school.

“That’s been my biggest point of contention with hitters over the years,” he said. “They say, ‘You’re just a pitcher.’ Hey, relax, I can hit a little bit. Now I’m trying to prove that. Talk is cheap. You’ve got to go out there and make it happen.”

There has been nothing orthodox about this Cardinals’ late-season run, but there rarely is with this team.