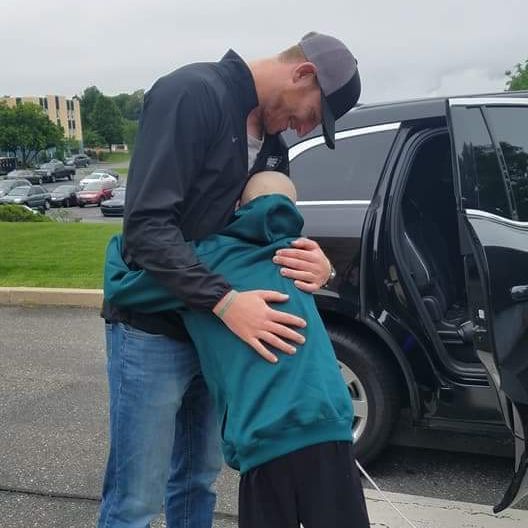 PHILADELPHIA — Philadelphia Eagles quarterback Carson Wentz met with the family of Lukas Kusters, whom Wentz befriended during the boy’s fight with stomach cancer, prior to Monday night’s matchup against the Washington Redskins.

The family was invited to the game as special guests of the team and brought onto the field during warmups. Wentz greeted each one with a hug and spoke with them for several minutes before posing for pictures.

Lukas’ Make-A-Wish was to thank Wentz for a video he sent him while he was in the hospital. The QB took Lukas — known as “The Dutch Destroyer” on the football field — on a guided tour around the Eagles practice facility along with linebacker Jordan Hicks, made him a smoothie in the cafeteria and interrupted interviews in the locker room so Lukas could get autographs. Lukas died 13 days after meeting with Wentz at the age of 10, and was buried in Wentz’s jersey.

Wentz and the Eagles have continued to keep the family close according to Lukas’ mom, Rebecca. That was on display Monday night.

Off the bench, Ronaldo can help Portugal in a way he refused to at Manchester United