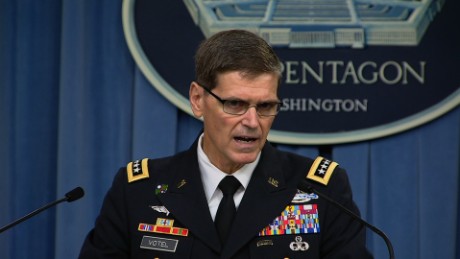 Gen. Joseph Votel, the commander of US Central Command, commented on a newly forged agreement between the US and Russia to establish a joint operations center to target ISIS fighters in Syria. It would require the US military share information with Russian forces on ISIS targeting and has drawn some resistance from the Pentagon.

Under an agreement reached Friday by Secretary of State John Kerry and his Russian counterpart Sergei Lavrov, the joint center would be set up only if a ceasefire that started Monday holds for seven days.

“I’m hopeful, but I’m very realistic about what’s before us,” Votel said at a security conference organized by the Institute for the Study of War. “There is a trust deficit with the Russians. It is not clear to us what their objectives are. They say one thing and then they don’t necessarily follow up on that.”

Defense Secretary Ash Carter has repeatedly expressed skepticism about Russia’s intent and actions in Syria, telling CNN’s Christiane Amanpour last week that Russia “could use its influence to help put an end to this civil war” in the country, which has raged for more than five years now. “They bear the responsibility of the consequences of things that they could avoid,” Carter said.

Votel said that the agreement presents an opportunity for reducing the violence in Syria, addressing “a horrific humanitarian situation,” and creating a chance for political talks to take place.

In the immediate term, Votel said he will be looking for opportunities “to communicate very clearly on things we can cooperate on” and that he will be seeking “ways to make this work within the confines of the agreement.”

The Centcom commander explained that the arrangement was taking the military into relatively new territory.

“We don’t have lot of experience with this,” he said, adding that they would have to start very deliberately, establishing a process and “ways of passing information back and forth.”

It remains to be seen whether the cooperative effort will work, he said. “I trust that our political leadership will do the right things and make the right calls about whether we should continue to do this or whether we should step away,” Votel said.

Another speaker, Lisa Monaco, the assistant to the President for Homeland Security, said that “folks will have to stay tuned” as to whether Russia will be called out for the recent hacks on the Democratic National Committee.

When responding to cyber threats, Monaco described the framework that has been set up.

“We are developing the intelligence, using a whole array of the intelligence and law enforcement tools to get the information about the bad actors,” she said. “Just like we did over the last decade and a half in terrorism. Coming together as a government — intelligence, diplomatic, military, law enforcement — and say let’s look at this information, let’s lean forward in what we can use, understanding we’re going to need to retain the ability to gather that information — and then let’s pick which tool, among the tools that we have in our toolkit is the best one to disrupt whatever that threat is, in this case cyber threats.”

When asked if that framework would be applied to hackers that may be in Russia, Monaco responded: “Look, we know Russia is a bad actor in cyber space, just as China has been, just as Iran has been … and we are going to apply this framework. Nobody should think that there is a free pass when you are conducting malicious cyber activity, just like they shouldn’t think there is a free pass on terrorists.”

Russian hackers are suspected to be behind recent cyber attacks at the DNC, where thousands of files have been released on the internet ranging from identifiable personal information of Democratic Vice Presidential candidate Tim Kaine to donor records.

The same hackers are also believed to be behind recent intrusions into election databases in Arizona and Illinois in an attempt to possibly disrupt the electoral process. To those concerns, Monaco echoed previous statements by FBI Director Comey that she has “great confidence in the resilience of our election system” and that it would be difficult to alter any election results.