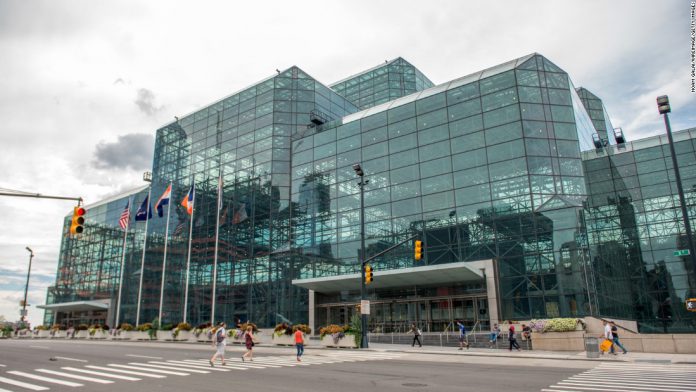 The Democratic presidential nominee’s staff announced Wednesday that the event will be held at the Jacob K. Javits Convention Center in Manhattan.

Most of the Javits Center is built with glass, from top to bottom.

Many people took to social media to make references about the symbolism of the venue.

“The place where Hillary will figuratively shatter the glass ceiling will literally have a glass ceiling. Hope no one confuses the two,” posted one user.

But there is one little twist in the choice of building.

Repubilcan opponent Donald Trump says he wanted to be part of the development of the Javits Center. But the city and state decided to oversee the project, according to his book “The Art of the Deal.”

He writes in length about how he disapproves of the choices of the architect and that his offer of help was refused.

“What happened at that convention center is that the city and state took a great piece of property and a great project and ruined it through terrible planning and ridiculous cost overruns,” reads his book.

Time will tell whether his female foe will break through the glass ceiling, but one thing is for sure — Clinton’s campaign will need to have tons of balloons on hand if she is the winner of the November 8 vote.

Former President Bill Clinton never looked happier than the night of the Democratic National Convention, when a cloud of balloons dropped from the ceiling.

Analysis: The truth about Trump's call to reopen schools

What we learned from Mary Trump's damning portrait of her uncle

What will the Ivy League's fall sports decision mean for college football?

Sports Gerald Ravindran - July 7, 2020
0
The first impactful decision regarding college sports' return to play this fall is almost upon us.The Ivy League will announce its plans on Wednesday...

Listening to nature: Notes from Session 1 of TED2020

Strategy, Innovation and Leadership Gerald Ravindran - July 7, 2020
0
TED looks a little different this year, but much has also stayed the same. The TED2020 mainstage program kicked off Thursday night with a session...

Strategy, Innovation and Leadership Gerald Ravindran - July 7, 2020
0
There’s a theory that the shock we’re currently experiencing is intense enough to force a radical reset of our values — of how we...