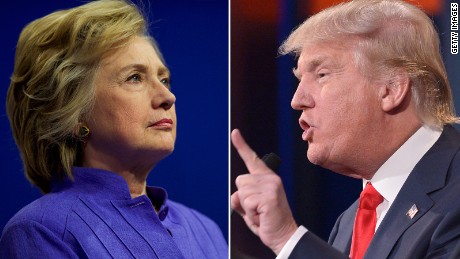 Among likely voters in Ohio, Trump stands at 46% to Clinton’s 41%, with 8% behind Libertarian Gary Johnson and 2% behind Green Party nominee Jill Stein. In Florida, likely voters split 47% for Trump to 44% for Clinton, within the poll’s 3.5 percentage point margin of error, and with 6% behind Johnson and 1% backing Stein.

In both states, Trump’s support increases as a result of the likely voter screen, among all registered voters, Clinton edges Trump 45% to 44% in Florida, and in Ohio, Trump tops Clinton 43% to 39% with Johnson at 12%.

The polls come as other national and battleground state polls suggest a sharply tightened contest compared with mid-August. While Clinton emerged from her convention with the advantage in surveys in both states and nationwide, more recent surveys suggest a closer contest and an enthusiasm gap that tilts in Trump’s favor. A Bloomberg Politics survey of Ohio voters released Wednesday morning found Trump ahead by five points, identical to the margin in this survey of Ohio voters, and Quinnipiac University surveys released shortly after Labor Day showed an even contest in Florida with Trump up four points in Ohio.

Nationally, several recent polls, including a Quinnipiac University poll released Wednesday and a CNN/ORC poll released last week, have shown the race within the margin of sampling error nationally.

And although the wide gap by education among whites that’s emerged in most polling on this contest continues here (Clinton’s support lands below 30 percent among those whites who do not have college degrees, while the race is closer among whites with degrees), Trump does hold an edge among whites with college degrees in both states; he’s up 9 points among that group in Ohio and 8 points in Florida.

Both candidates have the support of roughly 9 in 10 of their own partisans in each state, but Clinton trails Trump among independent voters in both places, with Trump up 10 points among independents likely to vote in Florida and 8 points in Ohio.

Younger voters, who were a key driver of President Barack Obama’s support in both 2008 and 2012, are not lining up as solidly behind Clinton in either state, and they are less likely than older voters to make it through a likely voter screen at this point in the campaign, suggesting they are less enthusiastic about voting in this election.

In Florida, Clinton tops Trump by 6 points among those under age 45 who are likely to turn out in November, and in Ohio, Clinton and Trump are about even among this group. Obama carried this group by double-digits in 2012 in both Florida and Ohio.

One big difference this time between younger and older voters: Support for Gary Johnson. In both states, Johnson reaches double-digits among those voters under age 45 who say they are likely to turn out, while he gets low-single-digit support among older voters.

These voters younger than 45 are also most apt to say they might change their minds between now and Election Day — about 3 in 10 in each state say they haven’t yet made a firm decision. Whether Clinton can spark their interest in voting and pull some away from a vote for Johnson could be critical to her chances in these battlegrounds.

In Ohio, Clinton faces deeper image challenges than in Florida. Her favorability rating there is worse than Trump’s, even among the broader pool of registered voters. Just 36% have a positive impression of Clinton vs. 41% who view Trump favorably. Clinton also trails Trump by 12 points on the question of who is more honest and trustworthy.

Not all is negative for Clinton, though. She tops the GOP nominee as more trusted on handling foreign policy and as better at handling the responsibilities of commander in chief. Trump’s strong points come on managing the economy, terrorism and immigration.

In Florida, the two candidates are about even in terms of favorability, with 46% having a positive impression of Clinton and 43% of Trump. Marco Rubio, the home-state senator who lost his Florida’s Republican presidential primary to Trump before deciding to run for re-election, holds a higher favorability rating than either of the two presidential nominees, with 51% having a positive take on him.

Here too, Trump is broadly seen as better on the economy (52% to 44% who think Clinton would do a better job handling it) and Clinton holds the edge on foreign policy (55% to 39%), but the two are about evenly matched in Florida on immigration (Clinton 49% to Trump’s 47%) and terrorism (Trump 48% to Clinton’s 46%).

Clinton has the edge on shared values (47% choose her, 41% Trump) and handling the responsibilities of being commander in chief (51% to 44%) while Trump is more often seen as honest and trustworthy (47% say Trump is, 40% Clinton, 12% neither).

In both states, the Senate races break in favor of the Republican incumbents, with Rubio topping Democratic challenger Patrick Murphy by a 54% to 43% margin among likely voters, and Rob Portman well ahead of former Gov. Ted Strickland, 58% to 37% among those most likely to turn out in November.

GOP senator says they've 'got to be able to see' Bolton manuscript before witness...