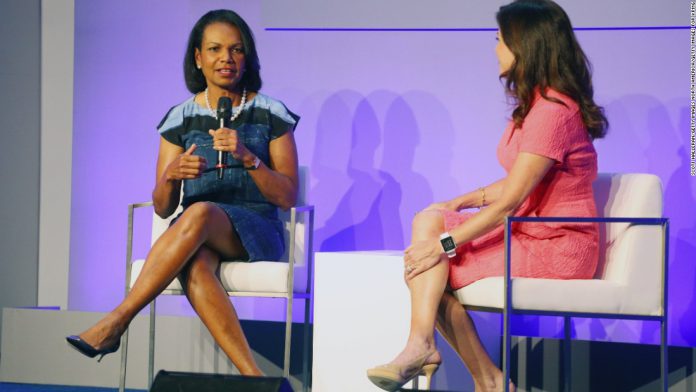 “Condoleezza Rice, she’s a lovely woman, but I think she’s a bitch,” Trump said in a speech at the Learning Annex in 2006, according to a story in the New York Daily News covering the event. “She goes around to other countries and other nations, negotiates with their leaders, comes back and nothing ever happens.”
Trump’s comments were first resurfaced by Deadspin on Tuesday. CNN’s KFile was also tipped off to the 2006 comments Tuesday morning. When asked if she had any response to the reported transcript of Trump’s remarks, Rice simply wrote back, “Exactly. Can’t wait until November 9!”

Rice took aim at Trump earlier this month on her Facebook page following the revelation of his 2005 hot mic comments where he said he could force himself on women.

“Enough! Donald Trump should not be president. He should withdraw,” she wrote on her page on October 8.

The Trump campaign did not respond to a request for comment on his 2006 comments.

Steve Felt, an attendee at the event who was quoted in the New York Daily News report, told CNN’s KFile on Tuesday that he remembered Trump’s comment about Rice.

“He went on a tirade about politics, probably 15 minutes into his talk about real estate,” Felt said. “Most people weren’t there to hear about politics and most people left. I left after about 45 minutes.”

Trump made numerous speeches in the mid-2000s for the Learning Annex, a company which provides continuing education courses for adults.

And while video doesn’t exist of Trump’s 2006 comments, which took place at the Javits Center in New York City in November of that year, in another Learning Annex speech from which a partial video was posted online in 2007, Trump appears to make reference to the comment.

The partial video, from a March 2007 speech in Toronto, starts with Trump mid-sentence, saying, “bitch, do you believe this? So I took heat,” before he goes onto explain what he had said about Rice.

“But what I said was this, she gets out an airplane cameras all over the place and she waves, ‘hi.’ She then goes and sits down with some dictator, they put the chairs at 45 degree angle and they have a photo shoot and she waves, ‘hi, hi everybody.’ She then gets back on the place and she waves again and nothing happens,” he said. “Has she made any deals? Honestly, has this woman made one deal that anybody knows, even if it was a bad deal. I’d even take a bad deal. She doesn’t make any deals.”

Representatives for the Learning Annex and the Javits Center did not respond to requests for comment from CNN’s KFile on this story.

Trump was more diplomatic speaking to CNN’s Wolf Blitzer in 2007 on the former secretary of state.