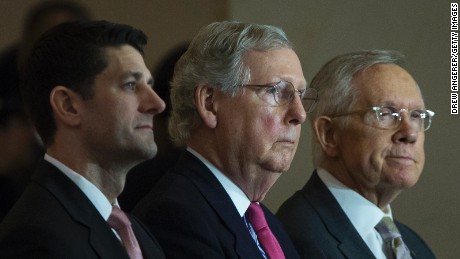 The tentative deal comes as lawmakers are racing to wrap up their work before heading home to campaign all next month ahead of November’s elections. If approved, the package would resolve a months-long partisan standoff over Zika and Flint funding that had become a political headache for the GOP leadership.

Each party’s leadership needs to sell the strategy to their rank-and-file, and it’s unclear if restless liberals and conservatives will accept it.

Under the outline of the deal, reached Tuesday night by House Minority Leader Nancy Pelosi and Speaker Paul Ryan, the leadership agreed to add aid for Flint on a separate water projects bill, setting up a Wednesday vote on that package. A House-Senate conference committee would later reconcile the two competing bills, setting the stage for final approval of the Flint aid in December.

Separately, as early as Wednesday, the Senate will move a funding bill to keep the government afloat until December 9, a package that includes $500 million for the recent Louisiana flooding, $1.1 billion to combat Zika and $37 million to fight the opioid epidemic. Senate Democrats had blocked the funding package, saying they needed commitments that aid for Flint would also be approved this Congress.

Speaking at the Washington Economic Forum on Wednesday morning, Ryan said he believes that moving the Flint aid on the water bill “will help unlock” the funding package, asserting that the Flint issue “now, I think, will be unstuck.”

House conservatives, who view the Flint aid as a bailout, are unlikely to be pleased.

Both chambers will need to act quickly because the deadline to fund federal agencies is Friday at midnight. Ryan said Wednesday there won’t be a shutdown because GOP members understand the process behind backing a short-term bill.

“Basically, we are having a low-drama moment now,” Ryan said.

On the Senate floor Wednesday morning, Minority Leader Harry Reid said the movement in the House is a “step in the right direction.” But he warned Senate Majority Leader Mitch McConnell not to back off commitments to approve money for Flint.

“Why can’t they just say they’ll do it?” Reid said. “We’ll continue to exercise caution moving forward, but I’m glad to see progress has been made.”

Reid said on the floor of the Senate he has been given assurances by Republicans that Flint funding will get done in the lame duck session, the period after the elections.

“I am convinced there is going to be help for Flint in the lame duck,” he said, adding this should clear the way for government funding to pass probably Wednesday in the Senate and then the House.