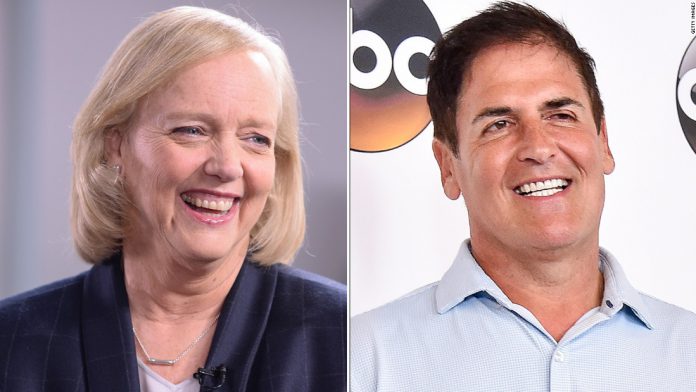 Hillary Clinton will be joined at Wednesday’s debate by two well-known billionaires who are backing her campaign, in what may be an attempt to rattle Republican nominee by su btly questioning his own net worth.

Meg Whitman, the Hewlett-Packard CEO and former Republican California gubernatorial candidate, and Mark Cuban, the outspoken billionaire owner of the Dallas Mavericks, will both be Clinton’s guests at Wednesday’s third and final presidential debate.

Meanwhile, Trump is countering with Obama’s half-brother and a ghost from Clinton’s past: Patricia Smith, the mother of Benghazi victim Sean Smith, who has accused the former secretary of state of “murdering” her son.

Obama: Trump’s rigged election claim ‘whining before the game’s even over’

Whitman, a longtime Republican, endorsed Clinton earlier this year, saying in a statement that she would vote for and donate to Clinton. Since then, Whitman has headlined events for Clinton and contributed a considerable amount of money to her campaign, including attending a $50,000-a-person fundraiser in California earlier this year.

Cuban sat in the front row at Clinton’s first debate against Trump, a move that was intended to shake the Republican nominee because the Dallas Mavericks owner has been so outspoken against the businessman.

Cuban endorsed Clinton at a July event in his native Pittsburgh. Afterwards, he told CNN that Trump was “bats— crazy.”

“Trump scares me,” Cuban said after speaking at the event. “Donald, initially, I really hoped he would be something different, that as a businessperson, I thought there was an opportunity there. But then he went off the reservation and went bats— crazy.”

Trump lashed out at Cuban for attending the debate with Clinton, calling him “dopey.”

Since announcing her candidacy, Clinton has picked up a group of high-profile billionaire backers. The campaign has, in turn, used them to question Trump’s wealth, citing the fact that he has not released his taxes as a reason for the questions.

Trump’s campaign did not immediately respond to a request for comment about Clinton’s guests or Smith.

At the second presidential debate, Trump appeared with three women who have in the past accused former President Bill Clinton of inappropriate sexual behavior as part of an effort to rattle Hillary Clinton.

Smith confirmed to CNN that she will be attending the debate at the Trump campaign’s request. She said she doesn’t know where she’s sitting yet, but she’s “heard rumors” that it’ll be the front row.

Smith spoke at the Republican National Convention in Cleveland, where she told the audience of Republicans that Clinton “should be in stripes.“

“This entire campaign comes down to a single question: If Hillary Clinton can’t give us the truth, why should we give her the presidency?” Smith said to cheers on the convention’s opening night.

Her son Sean, a foreign service information management officer, was killed along with US Ambassador to Libya Chris Stevens and two CIA contractors in the 2012 attack on the US diplomatic compound in Benghazi.