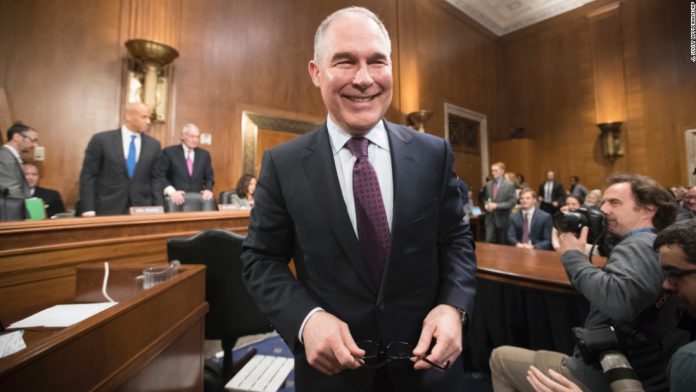 Democrats, outside the hearing chamber, complained about Pruitt not providing answers regarding his record as Oklahoma attorney general, while Republicans inside the chamber vented about the boycott.

“If Scott Pruitt is serious about serving as our next EPA Administrator, he should be more than willing to provide @EPWDems complete answers,” Democratic Sen. Tom Carper of Delaware tweeted shortly after the boycott was announced.

“It is a disappointing turn of events,” said Republican Sen. John Barrasso, chairman of the committee, after announcing the boycott. “This will impact future EPA nominees. The precedent for this delay will likely have longtime impacts after this nominee has left office.”

Pruitt is a lightning rod pick to lead the Environmental Protection Agency. The Oklahoma Republican has long viewed the EPA skeptically and has sued the agency repeatedly as the top cop in Oklahoma.

But in testimony last month Pruitt didn’t indicate he would take swift action to address environmental issues that may contribute to climate change. Instead, the Oklahoma attorney general said there is still debate over how to respond.