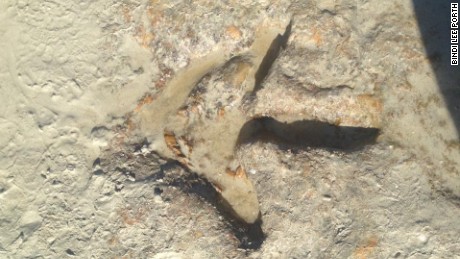 A 130-million year old dinosaur footprint has been found among the seaweed and surf on popular Cable Beach near the town of Broome, Western Australia.

Bindi Lee Porth told CNN she was collecting seashells when she felt an indent in the sand. Clearing it away, she found a number of massive, preserved footprints.

“I’ve been down there every night with tourists, kids, locals. I’ve been getting kids to stand in them and walk along the tracks of the dinosaurs,” she said.

“It’s unbelievable to stand in the tracks, close your eyes and put yourself back there in time. It’s very hard to describe, it’s just amazing.”

Porth said she had been on the beach dozens of times before without seeing any dinosaur footprints.

University of Queensland palaeontologist Steve Salisbury told CNN the tracks had probably been covered by sand or water for decades, but erratic tides at Cable Beach had finally revealed them.

He said the tracks were called Megalosauropus Broomensis and they were probably made by a medium-sized carnivore.

Dinosaur tracks have been part of Aboriginal mythology, known as Dreamtime, in the area for generations.

“This particular spot, for instance, is known to have tracks on it and is called the Place of the Emu Man,” Salisbury said, referring to the three-toed tracks similar to emu footprints.

Other footprints found include those of the stegosaurus and the enormous, herbivorous brontosaurus.

According to Salisbury, the rock which holds the footprints is stronger than the layers above it, which have washed away over the years to expose the footprints to the air once again.

“As it weathers away we start to see these ancient surfaces emerge. What you’re essentially seeing are surfaces that are frozen in time and were walked over by dinosaurs millions of years ago,” he said.