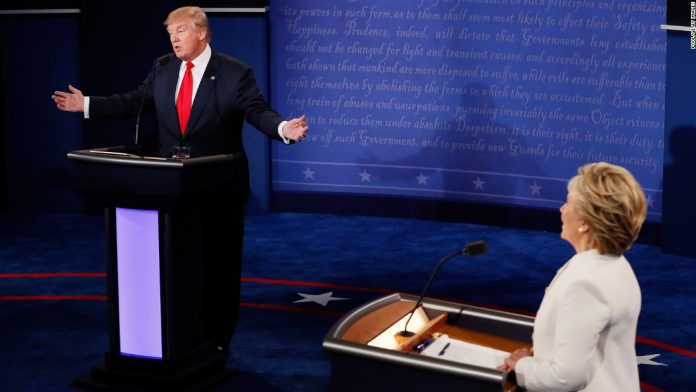 Over the course of 90 minutes, Trump scored some early hits against Democratic opponent Hillary Clinton. But it’s one moment that will haunt the Republican nominee and define the narrative heading into the campaign’s last days.

The comments — combined with a knock on Clinton as a “nasty woman” and a quip about “bad hombres” — is certain to dominate the political conversation in the remaining 19 days of the race. Though Clinton enjoys a commanding lead in the polls, the overwhelming narrative is likely to be about Trump’s potential refusal to accept defeat might trigger a historic confrontation in the days following the election.

Exasperated Republicans have no choice but to once again weather the fallout. It’s an especially tough task for Senate Republicans facing voters next month, as those who have not already disowned their party’s nominee could come under renewed pressure to do so.

Trump’s troubles have been brewing for weeks. He has been unable to move past damaging stories about his treatment of women, including a flood of recent sexual assault accusations — allegations he denies. Trump is now trailing Clinton in the polls and confronting a rapidly narrowing path to the White House, as even reliably red states such as Arizona have become battlegrounds.

The swirling controversies have only emboldened Trump, who has taken to furiously lashing out in all directions: at his accusers, the media, GOP leadership and, most recently, the political system. He is now outlandishly warning — with no evidence — that the election is “rigged” in favor of Clinton.

When questioned about the women who have come forward to accuse him of having inappropriately touched them, a visibly irritated Trump was defiant, going as far as to say he believes the women are part of a Clinton set-up.

“Those stories have been largely debunked,” Trump said, despite the fact that some of the women’s stories are corroborated by others. “It was lies and it was fiction.”

Trump Jr.: Running for president a ‘step down’

Clinton seized the moment to remind viewers that Trump has insulted the physical appearance of his accusers.

“He said that he could not possibly have done those things to those women because they were not attractive enough to be sexually assaulted,” she said.

These exchanges came after what had at first been a relatively subdued and policy-heavy debate. But it did not take long — or much — for Trump to lose his composure as he repeatedly interrupted Clinton and rolled his eyes from behind the podium.

At one point, Trump even lashed out by calling Clinton “such a nasty woman.” The comments were particularly remarkable given that they were discussing what should have been a relatively sleepy topic: entitlements.

Ultimately, the debate was one more missed opportunity for Trump to tackle his biggest handicap — the widespread perception that he lacks the temperament to be president. That could very well prove to be fatal. Trump won’t have another opportunity before November 8 to reach the sheer number of people who have tuned into the debates.

Even before Trump’s disastrous debate performance Wednesday night, there was growing evidence that the past few tumultuous weeks had taken a serious toll on his campaign.

Clinton now leads her GOP rival by eight points among likely voters, according to CNN’s Poll of Polls released Wednesday. Trump’s public image has also taken a hit from the recent scandals: A Bloomberg survey released on the day of the debate showed that Trump’s favorability rating had gone up to 62% from 56% a month ago (Clinton’s ticked down to 52% from 56% in September).

And Trump’s path to 270 electoral votes is also looking increasingly tough. Key battleground states including Florida and Nevada are now leaning in Clinton’s favor, while traditionally Republican strongholds like Arizona are now in play for Clinton.
Donald Trump vs. Hillary Clinton III: The most memorable lines

While Trump has tried to stay afloat, Clinton has largely stayed the course. She has let Trump stew in his controversies while continuing to hammer the message that he is fundamentally unfit to be president. Her campaign has also recalibrated its resources to seize on Trump’s falling momentum by expanding their map and focusing on early voting and get-out-the-vote efforts.

Trump’s standing in the 2016 race has grown progressively worse through the three debates.

In his first match-up against Clinton, Trump was consistently on the defensive, as his challenger needled him on everything from his temperament, refusal to release his tax returns and past comments about race and women.

It was clear that Trump’s lack of intense debate preparations — including his refusal to hold mock debates — was damaging, particularly as he went up against a veteran and practiced candidate like Clinton. Next to his opponent, Trump appeared angry and erratic.

Heading into the second debate in St. Louis last weekend, Trump’s critical mission was to slow the bleeding.

The damning “Access Hollywood” tape had become the last straw for many of Trump’s fellow Republicans, who finally cut ties with the controversial nominee. Things only grew worse when multiple women came out to accuse Trump of exactly the kind of behavior he was heard describing on that tape.

But rather than using the second debate to express genuine contrition, Trump tripled down. He convened a surprise media gathering featuring women who have accused Bill Clinton of sexual misconduct, before saying on the debate stage: “Bill Clinton was abusive to women. Hillary Clinton attacked those same women and attacked them viciously.”

Following the debate, even Trump’s top adviser struggled to answer for her candidate’s refusal to say he would accept the results of the election.

Pressed by Bash on why Trump didn’t say that on the debate stage — and whether Conway will personally urge Trump to accept the outcome — Conway grew impatient.

“Absent evidence of widespread abuse and irregularities, yes, I would say that, but I actually think I’ll be saying to him: ‘Congratulations, Mr. President,'” she said.

Cutting the interview short, Conway walked away, telling Bash: “I’ll see you there in two weeks.”