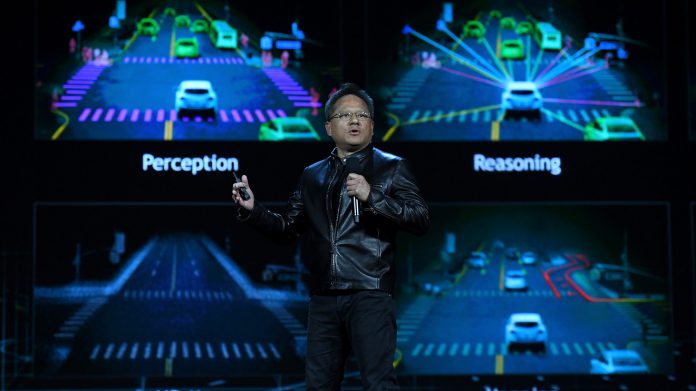 Nvidia Corp. had a ridiculous 2016, bringing in more profit in the first nine months than it did in all of 2015, and it is expected to add record holiday-quarter sales after the market closes Thursday. As an encore, Nvidia will simply attempt to become a major supplier to the automotive sector, a name brand in more homes and a company worth the largest stock gain of 2016.

Nvidia NVDA, -1.41%   was an in-the-shadows high-end videogame-gear specialist that survived the dot-com crash and recession with what many believed to be a niche business. It became the best-performing S&P 500 SPX, -0.14%  stock of 2016 thanks to a breakthrough in deep learning that has immediate applications in self-driving cars and data centers, two revenue segments that didn’t exist for Nvidia before 2016 yet could hit annual revenue of $1.3 billion.

Surprisingly, even after a very public short call, Nvidia has not slowed in 2017. Chief Executive Jen-Hsun Huang took Intel Corp.’s INTC, -0.17%  abandoned stage at the CES keynote and made a pitch to consumers and a strong case that his company can become a legitimate tier-two automotive supplier. The stock reached record highs again Tuesday and is up another 11.6% in 2017.

Analysts will be looking to Nvidia’s forecast tightly to see if it will justify the price in 2017. Projections now call for Nvidia to continue boosting profit and revenue at a rate most mature public companies would not recognize, so any forecasts or executive chatter about future moves could be closer watched Thursday than Nvidia’s incredible growth of 2016.

Here’s what to expect:

Earnings: Sell-side analysts surveyed by FactSet expect Nvidia to report GAAP profit of 83 cents a share, compared with 44 cents in the year-earlier period. Excluding one-time items, they call for non-GAAP earnings of 98 cents a share. Contributors to Estimize, a software platform that uses crowdsourcing from hedge fund executives, brokerages and buy-side analysts to predict earnings, expect Nvidia on average to report adjusted profit of 91 cents a share.

Nvidia, a leader in self-driving technology, announced partnerships with Bosch and Audi at CES 2017. Rob Csongor, Nvidia's automotive general manager, talked to MarketWatch about the company's promise to have a self-driving car on the road by 2020.

Nvidia has surpassed both consensus estimates consistently in the past five quarters, many by a wide margin. According to Estimize, Nvidia posted one of the largest beats, percent-wise, last earnings season among S&P 500 companies.

Revenue: The company is expected to report revenue of $2.1 billion, compared with $1.4 billion in the year-earlier period, according to the FactSet and Estimize consensus estimate. Nvidia has topped both the FactSet and Estimize consensus estimates in each of the past six quarters. In the fiscal third quarter, Nvidia beat the FactSet consensus by more than 18%, as management pointed to strong demand in its core GPU business and progress it has made in chips for virtual reality, data centers and autonomous cars.

See also: Want to invest in self-driving cars? Check out the chips

“Nvidia has left very little reason to believe that any of these businesses will take a step back in future quarters,” a group of analysts at Estimize wrote.

Stock reaction: Nvidia’s stock has increased an average of 14% on the day following its earnings report in the past six quarters.

In the calendar-year 2016, Nvidia’s stock soared nearly 224%, and they are now up a whopping 354% from 12 months ago, climbing nearly 70% in the past three months alone. The stock has drastically outperformed the S&P 500, which is up just 7.6% in the past three months and 22% in the past year. The average rating on Nvidia’s stock is the equivalent to buy, while the average price target is $104.59, which implies a decline from recent trading prices. Shares of Nvidia closed at $119.13 on Tuesday.

What to watch for: Nvidia has long focused on developing graphics processing units, or GPUs, for high-end videogame play. Recent deals with car manufacturers such as Audi AG NSU, -1.02%  , as well as a partnership with Alphabet Inc. GOOG, +0.25% GOOGL, +0.21%   to build-out artificial intelligence in homes, have helped the company enter exciting new areas even as its core market has continued to grow.

“The chip maker’s success has been tied to wider adoption of its GPUs not only by gamers but in high-growth markets such as data centers, automotive and virtual reality,” Estimize analysts wrote. “It also hasn’t hurt that PC gaming is one of the highest grossing forms of entertainment.”

Credit Suisse analyst John Talbott has attributed Nvidia’s success to investments the company has made since 2008 in expanding its research and development budget. In recent years, the company has consistently spent well more than $1 billion annually on R&D, and it surpassed that total in the first nine months of this past fiscal year alone.

How Nvidia Went From Gaming to GPUs

Nvidia CEO Jen-Hsun Huang talks about how GPU processing revolutionized his business. He speaks at the WSJDLive conference in Laguna Beach, Calif.

At his keynote at CES this year, Nvidia CEO Jen-Hsun Huang said the company’s booming gaming revenues have supported the company’s significant investments in new initiatives. Among those newly-announced initiatives are an ambitious plan to get autonomous cars on the road by 2020 through a partnership with Audi; launching an Nvidia Shield-branded home-assistant system running Google AI software; and launching a Twitch-like cloud-based videogame social platform and gaming service.

Citi analyst Atif Malik, who reiterated a buy rating and $120 price target on the stock last week, said Nvidia’s newly-announced home hub, cloud-based gaming services and autonomous-car technology may support long-term growth and its stock valuation. While they may not contribute significantly to sales this year while revving up, the potential long-term contribution to revenue is crucial in determining whether Nvidia will be able to sustain its valuation.

“The biggest debate on the stock” is valuation, as Nvidia trades at 29 times Citi’s 2018 EPS estimate, Malik wrote.

However, too-high expectations and sentiment could mitigate some upside, Sig Susquehanna analyst Chris Rolland warned in a note to clients this week.

“We believe expectations and sentiment into the quarter are high, evidenced by the near all-time-high stock price and the company’s track record of beating the Street in nine of the last 10 quarters, which could mitigate some of the upside,” he said.

Analysts at Estimize also cited “unrealistically high expectations” as a potential near-term concern, arguing that too-high expectations could have a detrimental impact on the stock if Nvidia misses—or only meets—expectations, as opposed to blowing them out of the water as Nvidia has in the past.

Potential new competition from Advanced Micro Devices Inc. AMD, +0.72% is also something to watch. Last week, AMD reported better-than-expected earnings, sending its shares 29% higher over the past five days. Meanwhile, an unconfirmed report in December said Intel may start licensing GPU technology from AMD when its contract with Nvidia ends at the end of this quarter.

Workshops, pitches and the shortlist of Europe’s hottest startups in The Europas Awards

World Gerald Ravindran - June 4, 2020
0
Well the votes from the public and the judges are in and we can finally reveal the shortlist for The Europas Awards 2020 to...

Mattis tears into Trump: 'We are witnessing the consequences of three years without mature...