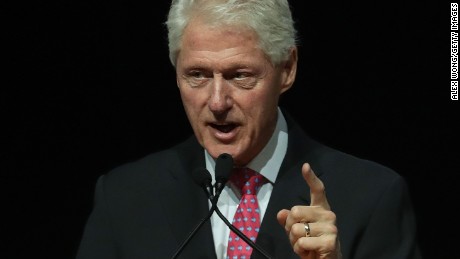 Campaigning in Las Vegas, the former president said he was “glad” to sub in for the recuperating Democratic nominee and said she was “feeling great.”

“It’s a crazy time we live in where people think there’s something unusual about getting the flu,” Clinton then said. “Last time I checked, millions of people we’re getting it every year.”

A spokesman for the 42nd president quickly said Clinton misspoke.

Bill Clinton: Has on occasion had dehydration spells

It’s not the first remarks Bill Clinton has made about his wife’s health this week that have caught attention. The former president also told CBS’ Charlie Rose that his wife has “rarely” but occasionally gotten “severely dehydrated” over the years.

“Rarely, on more than one occasion, over the last many, many years, the same sort of thing’s happened to her when she got severely dehydrated, and she’s worked like a demon, as you know, as secretary of state, as a senator, and in the years since,” he said.

The comments were fuel for conspiracy theorists who have questioned the candidate’s health and her campaign’s transparency about it.

Many of the online claims have been unfounded, but Clinton’s early departure from a September 11 memorial and video of her stumbling with help into a van prompted her campaign to reveal the diagnosis days earlier.

Clinton said she had gotten “overheated” at the event and canceled three days of campaign travel to recover.

She is set to return to the trail on Thursday.