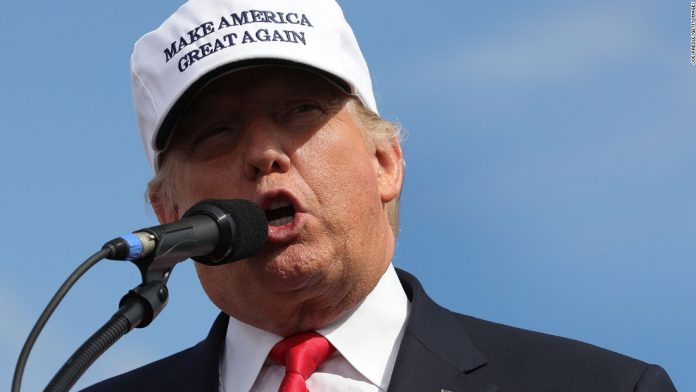 All but one of the new spots, a mix of the anti-Hillary Clinton and positive themes he argues on the campaign trail, were not announced by the Trump campaign, but spotted on air in battleground states and national television stations by the ad tracking firm Kantar Media/CMAG.

Campaign spokesman Jason Miller told CNN Tuesday the organization is sticking with its plans, announced in late September, to air $100 million in ads during the final seven weeks of the campaign.

To reach that level of spending, Trump would need to be particularly aggressive, reserving an additional $30 million in television ads on top of the $14 million he has already booked for each of these remaining three weeks.

Trump has continued to say in recent days that he plans to spend $100 million of his own fortune on the race, which would require Trump spend another $40 million by Election Day. Miller said he was not aware of any changes to that plan.

The new ads give Trump the fodder to make his economic and anti-Clinton case to television viewers, who have watched a series of negative revelations about Trump, including allegations of sexual misbehavior and assault.

Four of the new Trump ads are decidedly anti-Clinton.

One features Laura Wilkerson of Pearland, Texas, a mother whose voice cracks with emotion as she explains how her son, Joshua, was killed by an undocumented immigrant.

“Hillary Clinton’s border policy is going to allow people into the country just like the one that murdered my son,” she says.

Another unearths controversial comments Clinton has made about young African-American gang members as well as more recent comments about supporters of Bernie Sanders and Trump.

Two other spots argue against Clinton’s Washington experience as a senator and secretary of state.

“She’s been there 30 years. Taxes went up. Terrorism spread. Jobs vanished. But special interests and Washington insiders thrived,” the narrator says in one spot. In another: “Hillary failed as secretary of state, and now the world is unraveling.”

The remaining two new Trump ads argue the Trump’s policies would be good for the economy.

“I think Donald Trump cares about the working man, because the working man has made him what he is,” a hard-hat wearing worker says in one spot, which is airing in Ohio, Pennsylvania and Virginia. “Donald Trump has given this whole area around here a glimpse of hope for our future.”

The other spot argues Trump’s proposals around taxes, healthcare, childcare and maternity leave can the middle class achieve the American Dream.

“It takes a builder to rebuild the American Dream, and Donald Trump has the blueprint.”