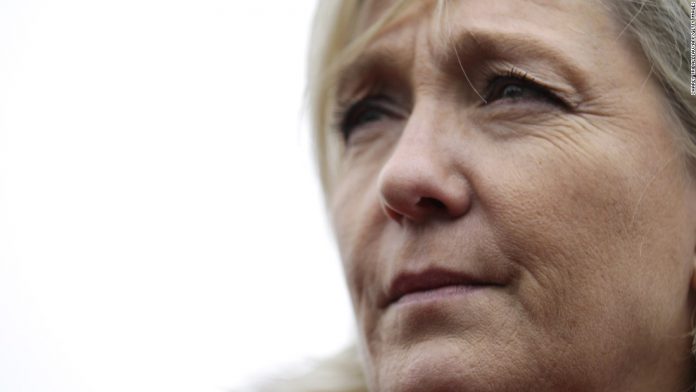 Trump signed an executive order Friday barring citizens of seven Muslim-majority countries from entering the United States for the next 90 days and suspending the admission of all refugees for 120 days. The order also indefinitely suspends the Syrian refugee program.

Dubbed a “Muslim ban” by many, the order has been condemned by the countries affected and Western European leaders.

“I think that most of the reactions are in bad faith,” Le Pen, who is expected to be a frontrunner in France’s presidential elections in April and May, told CNN’s Christiane Amanpour.

“It is a temporary measure. It targets six or seven countries, countries that of course are responsible for terrorist threats.

“So I think Donald Trump and his intelligence services wanted to set up criteria and conditions to avoid having potential terrorists enter the United States, where they might commit attacks, the same way that France was the victim of attacks,” she said, pointing out that many Muslim-majority countries have a permanent travel ban against Israeli citizens.

When asked whether she would impose a similar ban in France, she avoided answering directly, saying only that France had to be “very vigilant” and to secure its borders.

“France no longer has any borders because of the EU,” Le Pen said.

Le Pen said the flurry of executive orders signed in Trump’s first days in office, which include cutting funds to aid programs to erecting a wall along the US-Mexican border, did not surprise her.

“He was elected and he said that he was going to do this. And now the world seems to be scandalized because he’s implementing what he promised he would do during his campaign,” she said.

Le Pen is basking in major geopolitical shifts in the world, seeing Trump’s rise and Britain’s vote to leave the European Union as a boon to her presidential campaign, which she has fought on an anti-immigration platform.

She called for a stop to the flow of immigrants coming into France, but said she was not interested in mirroring Trump’s wall to protect French borders.

While she said she did not look for models abroad, Le Pen supported Trump’s anti-free-trade policies, saying that “unfettered free trade has led to a disaster.”

“I see that these ideas are now being put into implementation by the British, following the referendum, and I think following the election of Donald Trump that people are also calling for an end to this wild and anarchic globalization, and that we are moving towards greater patriotism, to the preservation of culture, of local jobs,” she said.

The party leader repeated a promise to hold a referendum on leaving the European Union within six months if she were elected president. She said she would first try and strike a deal to return territorial, economic and legal sovereignty to France, and failing that, she would let the French people vote on whether they wanted to remain in the regional bloc.

On Tuesday, Le Pen locked horns with the European Parliament, missing a deadline for repaying 300,000 euros that the Parliament says she misused.

The party leader denied the allegations in the interview and characterized the issue as a “political attack.” She said she would refuse to pay back the money.

“It’s inadmissible. We have been persecuted by the EU Parliament. They are our adversaries,” she said, adding that she had filed a complaint against the European Anti-Fraud Office.

Le Pen, a long-time supporter of Russian President Vladimir Putin, also said that she did not believe Russia had “invaded” Crimea and slammed the sanctions slapped on the country.

“These sanctions are completely stupid. They have not solved any problems, they haven’t improved the situation at all. All they’ve done is create major economic problems for the EU,” she said, adding that the world would achieve some peace with a “step back from the Cold War.”

Meet the first wave of speakers & enter your startup for The Europas Awards, 25 June