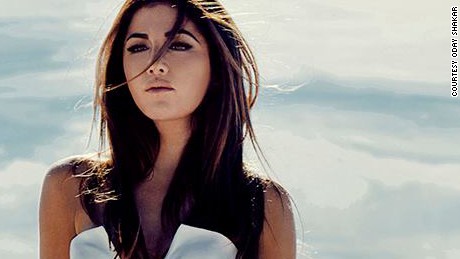 “The skirt will be black for the show, but I’ve actually fallen in love with this color,” Shakar tells his fitting model.

Already a red carpet regular, Shakar’s designs have been worn by the likes of Sandra Bullock, Sofia Vergara and Dianna Agron since he first launched his brand in 2009.

On September 9, he plans to take his career to a new level, showing his collection alongside the some of the world’s most exclusive brands at his New York Fashion Week debut.

From Anaheim to Baghdad

Hailing from affluent Anaheim Hills, Southern California, Shakar was born to parents who had fled Iraq during Saddam Hussein’s regime.

After the end of the Gulf War, 12-year-old Shakar and two of his siblings were sent to Baghdad to reconnect with their heritage. He arrived armed with a sketchbook and Discman, speaking no Arabic.

“I remember smelling the smoke in the air as we drove into Iraq. There were statues of Saddam Hussein and burned cars on the side of the road,” he says.

“The hardest was not understanding how to be from one country and coming from another. And [with] these two places — Iraq and America — being at war, I didn’t know where I stood or who I really was.”

But that didn’t stop him from immersing himself in the culture. The women, he remembers, were particularly fascinating.

“They wore the most beautiful eyeliner, hair out and no Hijab. They were so fashion forward with very little to work with. They would use old pieces of fabric and turn it into something beautiful.”

At 18, he moved back to the United States to study at the Fashion Institute of Design & Merchandising in Los Angeles, but quit weeks before his 2003 graduation when he was given the opportunity to design costumes for a music video.

Shakar continued to design on-off pieces for clients, and was preparing to launch a line of his own. But plans were put on hold when he was diagnosed with stage 4 thyroid cancer in 2008.

“I didn’t even know what that meant, let alone to be stage four,” he said.

Read: Behind the scenes of Africa’s catwalks

Shakar had to have his thyroid removed and spent weeks in isolation for radiation therapy.

“There was a moment I was in so much pain laying in the hospital, and when I tried to draw my hand wouldn’t work,” Shakar said.

“It was the scariest feeling ever, that I didn’t have that ability anymore. Not physically being able to sketch or even use my hands, I remember thinking this is the worst thing that could possibly happen.”

And yet he refused to let the disease quash his ambitions. While in isolation, he slipped sketches of his gowns to an admiring client and first business partner.

Shakar officially launched his brand in 2009, and only a year later, he found himself featured in tabloids across America when Sandra Bullock wore one of his designs at the 2010 MTV Movie Awards.

Shakar went into remission in 2011.

Shakar’s upcoming collection will be the 12th he’s designed, but his first shown at a major fashion week.

“The minute I got [to New York] in March, there was only one goal: to figure out who I am as a designer,” he said.

Read: Why celebrities are obsessed with Anya Hindmarch

Taking cues from his role model, seminal fashion designer Halston, and inspiration from his mother and sisters, Shakar calls his collection a mixture of “two worlds, a westernized influence on the Middle East,” featuring geometric patterns inspired by Islamic architecture, bold prints, and Western silhouettes.

“It’s much more than just designing, it’s what the clothes represent and how they make women feel,” he said.

In India, Trump aims for crowds and strategic friendship

Sports Gerald Ravindran - February 23, 2020
0
Yoenis Cespedes broke his silence with the media Sunday, saying he didn't want to talk about the past and is hoping to be ready...