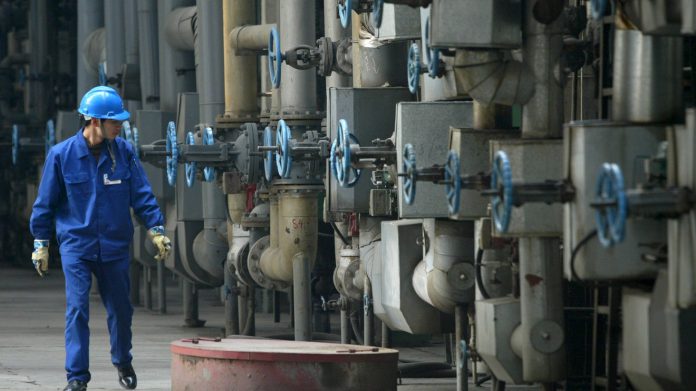 China, the world’s No. 2 oil user after the U.S., imported 32.85 million tons of oil in August, equivalent to 7.8 million barrels a day, data from the General Administration of Customs showed Thursday. The figure is the highest level of monthly imports since December and marks an increase of 7% from a year ago.

The data are another indication that oil demand around the world has been spurred on by low prices, although signs have emerged that in the U.S. and other developed countries fuel consumption may be slowing down.

In China, oil imports have been high all year due in part to strong buying from independent refiners known as teapots. A loosening of import rules on teapots has led to a surge in foreign oil purchases by these refiners. Beijing, meanwhile, is widely seen as taking advantage of low crude prices to build its strategic oil reserves.

The course of U.S. oil inventories is expected to come into focus later this week. Data from the U.S. Energy Information Administration due during U.S. trading hours early Thursday are expected to show stockpiles there rose by 500,000 barrels last week, according to a Wall Street Journal survey of analysts.

But recent data from the American Petroleum Institute, an industry group, bucked those expectations, helping to fuel Thursday’s rally. The API showed a 12.1 million-barrel drop in inventories.

Prices have been rallying this week following a cooperation pact between Saudi Arabia and Russia aimed at stabilizing the oil market as a supply glut persists. But skepticism over whether big producers will follow through on formal production caps has kept those gains in check, and prices have failed to maintain any rally above $50 a barrel since June.

“Mostly, the [price] movement is down to speculation,” said Peter Lee, an oil and gas analyst at BMI Research.

“There hasn’t been a clear-cut sign from any of the other players that they will come to an agreement.”

Read: Russia, Saudis are all talk, no action when it comes to oil-output freeze

In addition, given that output levels among members of the Organization of the Petroleum Exporting Countries are so high, “even if they would agree on a production freeze, it basically means that everyone would be producing at their peak rates,” Lee said. “It doesn’t do much in terms of the oversupply.”

An informal OPEC meeting is set for later this month.

Apple's new iPhone and Watch may not look all that different but there are some big changes, for better or worse.