OKLAHOMA CITY — Paul George was the last person to step off a private jet sent by Oklahoma City Thunder owner Clay Bennett to fly George and his family from Los Angeles to Oklahoma City. The 6-foot-9 forward ducked his head under the doorway and adjusted the brand new Thunder hat he’d worn on the flight. He was quickly greeted by Thunder general manager Sam Presti, assistant general manager Troy Weaver and coach Billy Donovan.

Handshakes were exchanged and quick conversations made. One staffer told George “nice hat,” to which George replied with a wink, “you know it.” He turned and looked ahead. In front of him was a scene of approximately 500 Thunder fans, all corralled behind a chain-link fence at a private hangar at Will Rogers Airport.

George was supposed to arrive at 1 p.m., and word had circulated on social media. Thunder fans, as has become their tradition, deployed to meet at their usual spot. On what was of course the hottest day yet of summer in Oklahoma, George’s flight was delayed an hour and a half. Bottles of water were passed around. A dozen or so pizzas showed up. Fans chanted, played music, fanned themselves with homemade signs and exchanged conversations that mostly started and ended with some variation of “Paul George? Paul George!”

But George was here now, and he walked to the fence and pressed his hand up against it, dragging it from one end of the line to the other. Fans chanted “P-G-O-K-C!” as he posed for a selfie up against the fence. He waved and jumped in a black SUV. Fans hustled their way to line the road that exited the hanger and waved at George and his family as they were chauffeured off into OKC.

And thus began Day 1 of a one-year recruiting trip.

The Thunder’s trade for George rattled the foundation of the NBA a few hours before free agency opened, a seismic shifting of a superstar player teaming with the reigning MVP. But with each breakdown and each conversation about George joining Russell Westbrook, a “yeah, but …” qualifier followed. Yeah, but it might be for only a year. George is an unrestricted free agent next summer, and it’s the worst-kept secret in the league that he apparently has eyes on the West Coast.

The Thunder know it now and knew it when they agreed to the trade, but Presti was undeterred. George is the kind of player worth that risk, especially when you already have one the caliber of Westbrook, who’s about to turn 29 years old.

It seems open-and-shut from the outside, that the Thunder are renting George for a season and will be reduced to watching another star player leave them. But people connected to George push back against the narrative, suggesting the picture is not as clear as some think it is. A source close to George with direct knowledge into his thinking put it this way: “Everything is on the table with Paul, and anything is possible.”

George is “really excited” to join the Thunder and Westbrook, according to the source, and views this season as an open-ended opportunity. Because when it comes down to whatever George decides next summer, the source said, “Winning is his top priority.”

What led to George’s unexpected arrival in OKC wasn’t a trade demand. It was a declaration of intent. His message to the Indiana Pacers was direct. He wanted to see a strong direction, and a plan for prosperity. With neither of those paths on the horizon, he made his intentions clear to leave when he’d have the opportunity, likely for the Los Angeles Lakers, as Adrian Wojnarowski reported in June. That, though, was before he was traded to the Western Conference to a team with the MVP on it. Does that change his perspective? If winning is truly his top priority, how does a Lakers team that won 26 games last season, albeit with a bright young core, fit into that? Unless the Lakers produce a second star, they don’t align with the wish list.

The Thunder made the deal with that knowledge in mind, believing they could sell George on their winning culture, a player they feel fits perfectly into it. They aren’t covering their ears with all the Lakers noise. They are well aware. It is entirely understood from both sides, according to sources, that George is entering his time in Oklahoma City without a commitment to the team’s future — but also with an open mind to potentially be a part of it.

The leaguewide perception of George as a rental limited the offers the Pacers received, which is why the Thunder’s offer (Victor Oladipo and Domantas Sabonis) is the one the Pacers accepted. None of the offers Indiana received were very enticing with respect to a star of George’s caliber, and that was directly connected to his muddy future. The Thunder, though, saw an opportunity to instantly rebuild a team that a year ago lost Kevin Durant, a chance worth taking. OKC has been pursuing a star to pair with Westbrook the past few months, with George marked as its No. 1 choice. As one team insider noted, Durant was the Thunder’s ideal fit alongside Westbrook, but right behind that would be Paul George. They know they wouldn’t have landed a meeting with George next summer when he became a free agent. They couldn’t even get one with hometown star Blake Griffin a couple of weeks ago. But this gives them a seat at the table, and a running start at that. 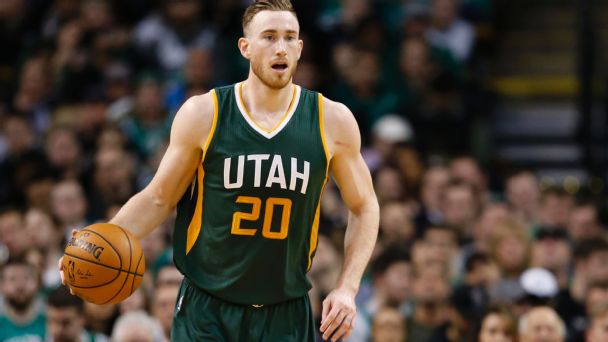 We’ve got you covered with the latest news, analysis and buzz. Full coverage

The Thunder are already trying to sell George on all their strengths, starting with a rabid fan base that will lavish a star and make him feel like the king of the city. After his welcome at the airport Tuesday, his official introduction Wednesday will be more of an event than a standard news conference, with live music and fans and entertainment at a grand opening for a new event center in the blossoming Film Row district of OKC. The Thunder aren’t being understated with this; they are trying to sell George on all of it.

The team is confident their culture and organizational structure will impress George. Putting him in the gym for a season with Donovan, who is known for his ability to personally connect with players and build strong relationships. Or the team’s highly regarded support staff, from personal barbers and chefs, to their spare-no-expense state-of-the-art practice facility with all sorts of bells and whistles.

Or playing with Westbrook, who’ll immediately become the best player George has ever shared the floor with in his NBA career. That’s where the most responsibility falls on George’s future. Westbrook set the league on fire last season, but with George alongside, he’ll have to gear down and focus on other areas again, as he did with four-time scoring champion Durant.

Westbrook will have to build a strong on-court bond with George, but really, if they’re to co-exist in Oklahoma City for the long term, Westbrook will need to first plant a flag himself. He’s eligible for a five-year extension, and the offer is on the table, and has been for almost two weeks now. There’s no indication Westbrook is uninterested in accepting, but as one person who knows him well said, “he does things when he wants to.”

Adding George changed the outlook on the extension, going from a stabilizing procedure to entice future free agents, to one where Westbrook himself is evaluating as George’s future hangs in the balance. Westbrook has up until the last day before the start of the 2017-18 regular season to sign the extension, and while the Thunder would very much like him to now, and many believe he will, it could drag on. But if Westbrook is into messaging and wants to play with George in OKC for the long term, signing sooner than later sends a positive one.

George is aware of the narrative. He’s looking to reset the conversation and give his new basketball home a chance, at least on the surface. He told Sports Illustrated recently his desire to play for the Lakers is “overstated.” The Thunder have a pretty clear playbook in front of them; while the airport greetings and excitement might count for something, it’s about success and how high George can reach for it in OKC. Win, and win when it matters, and your chances suddenly look much better.

On Wednesday, the Thunder will officially introduce George at a party in the city. They stand tall a year after the departure of Durant, and will raise a glass to a new day and a vibrant outlook. There are no guarantees. There are no assurances. And that’s what gives them hope.