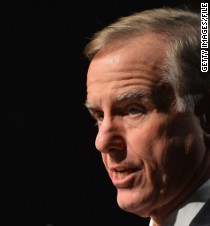 Dean, who has endorsed Hillary Clinton, and the Trump campaign have not responded to a CNN request for comment. The Clinton campaign, for which Dean has acted as a surrogate, also hasn’t responded for comment.

Trump has said throughout his life that he doesn’t drink alcohol or do drugs, often citing the substance abuse issues his late brother had as a deterrent.

Even some of Dean’s allies are swatting down the gossip. David Axelrod, a former top adviser to President Barack Obama and now a CNN contributor, took to Twitter on Wednesday to register his disapproval.

“I love @GovHowardDean,” Axelrod tweeted. “But this is nuts.”

Dean appeared the day after the debate on MSNBC, where he’s a contributor and where he elaborated on his hypothesis.

Dean, a medical doctor, began the interview by saying he would “never” diagnose someone over television.

“But (Trump) has some interesting — that is actually a signature of people who use cocaine,” he said. “I’m not suggesting that Trump does.”

MSNBC anchor Kate Snow cut him off, pointing out that Dean did suggest that with his tweet on Monday night. Dean said he was only “suggesting that we think about it.”

“Here’s the interesting constellation,” Dean said. “So, he sniffs during the presentation, which is something that users do. He also has grandiosity, which is something that accompanies that problem. He has delusions. I’m not talking about being crazy, but for example, when he told everybody it was very smart not to pay taxes and then denied he said it, after he said it in front of 100 million people. It’s not that he’s delusionary about it; it’s that he thinks somehow he’s going to not get caught. That is delusional. He has trouble with pressured speech. He interrupted Hillary Clinton 29 times. He couldn’t keep himself together.”

He added, “So, look, do I think at 70 years old he has a cocaine habit? Probably not. But, you know, it something that — I think it would be interesting to ask him and see if he ever had a problem with that.”

“I think it’s unbelievable that with the exception of a few other members of the media that (Dean’s accusation) has largely gone unnoticed, because for someone who has been a governor, a presidential candidate most importantly, a medical doctor to make that prognosis with no fact is pretty pathetic and unreal,” Spicer told MSNBC.