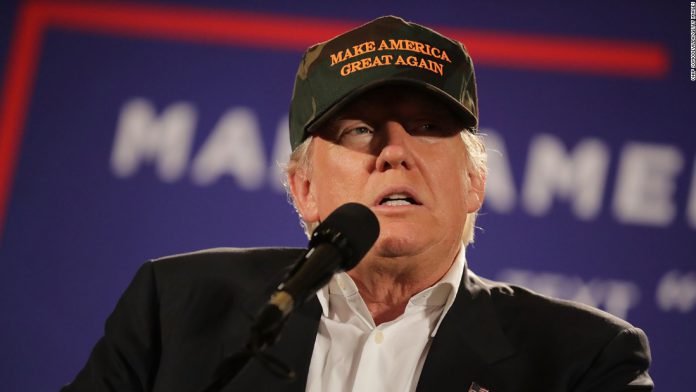 The Republican nominee also attacked his rival Hillary Clinton, who held a dueling evening rally just 30 miles away in nearby Raleigh, as unfit to serve as commander in chief, arguing the former secretary of state “can’t be trusted” to protect the United States.

“We know Hillary can’t be trusted — we know that — with America’s security. You take a look at her email situation, can we trust her with our security?” Trump said of his rival, who has repeatedly argued that Trump is too erratic to be trusted with the nation’s security.

Trump delivered his military-focused remarks days away from the election that could be decided by voters in this state, where more than 100,000 active duty military personnel are based and where the military supports nearly 600,000 jobs, according to the North Carolina Department of Commerce. Additionally, 775,000 veterans live in the state.

“I wouldn’t do what they did. I’m brave in other ways. I’m financially brave. Big deal,” said Trump, who sought multiple deferments to avoid military service in Vietnam, his voice trailing off.

Trump later pivoted back to the group of veterans who served as the backdrop to his speech alongside a massive American flag, suggesting they would recoil at the thought of serving under Clinton as commander in chief.

“You know, when I look at these great admirals and these great generals and these great Medal of Honor recipients behind me, to think of her being their boss?” Trump said skeptically after a pause. “I don’t think so … They’re incredible patriots, they would never say a thing, but I know what they think.”

Trump rehashed his plans to build out the military by increasing the number of troops, ships and fighter jets and, stoking fears of ISIS attacks reaching American shores, Trump also pledged to defeat the terror group and “defeat it quickly.” And he tied that plan to his hardline immigration policies, arguing that Clinton “wants to fling our borders wide open” and allow terrorists “to infiltrate our country,” mischaracterizing his opponent’s immigration plans.

But Trump didn’t offer just bravado and fear-mongering. He also sought to speak directly to military families in North Carolina whose votes will be crucial to securing victory in this pivotal swing state.

“The military families of North Carolina have shed their blood and poured out their hearts for our country,” Trump said, before pledging to fully equip military forces in combat, end the defense sequester and deploy troops only if military action is “vital” to US national security interests.

Trump also vowed to improve medical care military veterans receive as he lamented problems at the Veterans Administration and the high rate of suicide among veterans.

Trump, who repeatedly criticized the foreign policy actions of President Barack Obama, also argued for a break with past foreign policies of the United States, vowing a Trump administration “will stop trying to build foreign democracies … and race recklessly to intervene in situations that we have no right to be there, folks.”

Trump will return to the state several times before voters head to the polls on Tuesday, with rallies already scheduled in the state on Saturday and Monday.

Trump's unbroken pattern of disdain for the rule of law

Analysis: Russian meddling was out of a spy novel in 2016. It's turning 2020 into a horror movie.

The most interesting non-roster player for all 30 MLB teams

Sports Gerald Ravindran - February 22, 2020
0
The rites of spring: pitchers and catchers, Jose Altuve's tattoo and, of course, non-roster invitees. This is one of my favorite articles to write...

Sports Gerald Ravindran - February 22, 2020
0
HOUSTON -- The ultimate goal hasn't changed for P.J. Walker. He wants to be an NFL quarterback.But the chance to play in the XFL...

Politics Gerald Ravindran - February 22, 2020
0
Yet "Race Against Time" is more than a book about the past. It speaks to today, arriving at a moment when history and its...