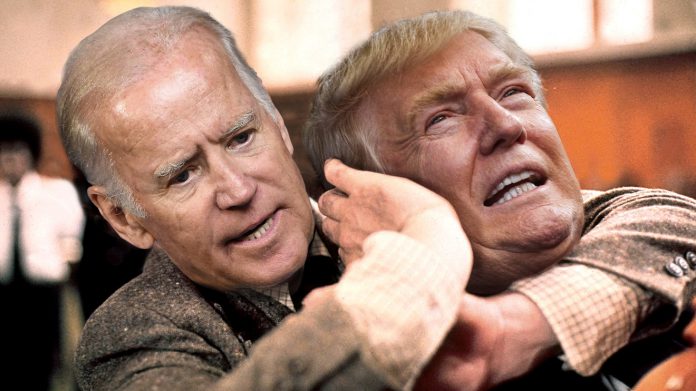 “The press always asks me: Don’t I wish I were debating him?” he said. ”No, I wish I were in high school, I could take him behind the gym. That’s what I wish.”

Trump, never one to shy away from confrontation, at least verbally, had this to say in response at a Florida rally on Tuesday.

“Did you see where Biden wants to take me to the back of the barn? Me. He wants to. I’d love that. I’d love that. You know when he’s Mr. Tough Guy? When he’s standing behind the microphone by himself — that’s when.”

Trump also said that if he had been the one to first spout fighting words, the media would have been all over him: “If I said that, they’d say: ‘He’s violent. How could he have done that.’”

He kept with the theme when turned to the more pressing issue.

Here’s a video of the rally:

Canadian police believe the remains of 2 indigenous women who were victims of a serial killer are likely in a landfill, but will not...

As China moves away from zero-Covid, health experts warn of dark days ahead

With eye on China, US to boost military forces in Australia — and 'invite' Japan to join in

Off the bench, Ronaldo can help Portugal in a way he refused to at...

What motivates Louis van Gaal for his last dance with Netherlands at World Cup?

Sports Gerald Ravindran - December 7, 2022
0
DOHA, Qatar -- The exchange between Louis van Gaal and the journalist was short, but it captured the essence of the Netherlands' manager: confident...