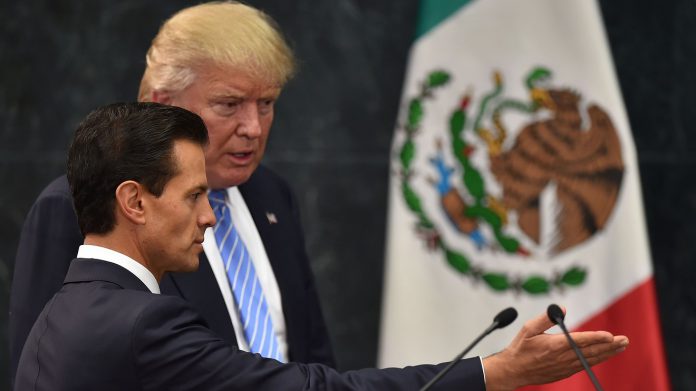 Across financial markets, nowhere does U.S. polling data have more of an impact than on the Mexican peso.

The peso, one of the most heavily traded emerging-market currencies, weakened sharply at about 5 a.m. Eastern Time just after a Bloomberg Politics poll showed Donald Trump had a five percentage point lead over Hillary Clinton in Ohio, a key swing state.

The dollar USDMXN, +0.6277%  has risen 1.2% against the peso since the poll was released, buying 19.25 pesos in recent trade, compared with 19 pesos immediately beforehand.

The move is illustrated in the chart below:

Trump has advocated more protectionist trade policies, including a possible retooling, or dismemberment, of the North American Free Trade Agreement. This could hurt the Mexican economy by curbing imports into the U.S., the country’s largest trading partner. Trump has also famously promised to build a wall across the Mexican border to try and clamp down on illegal immigration, to be paid for, he promises, by Mexico.

Falling oil prices also helped contribute to the peso’s weakness. The country is a large oil exporter and its currency is sensitive to moves in oil prices. Oil CLV6, -1.25%  for October delivery was down 50 cents, or 1.2%, to $44.38 a barrel on the New York Mercantile Exchange.