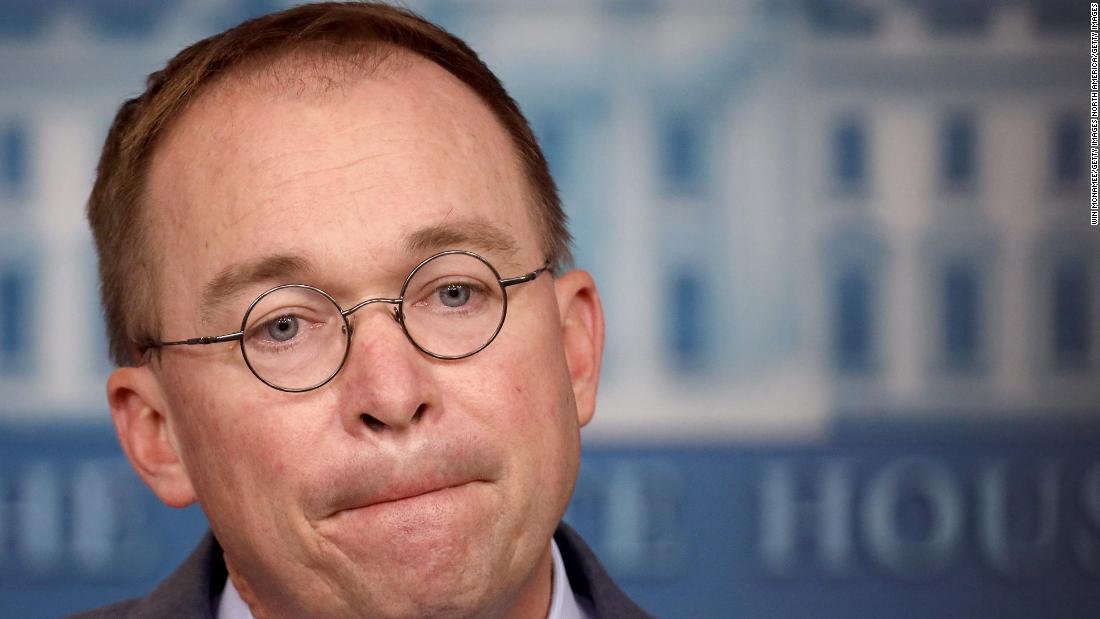 Mulvaney did not appear for his scheduled testimony Friday morning despite him receiving a subpoena, because the White House told him he should not appear, claiming that legally he is immune. According to transcripts of two other witness’ testimony released Friday, Mulvaney was a key broker inside the White House pushing for Ukraine’s announcement of investigations that could politically help President Donald Trump.

On Friday night, Mulvaney asked a court to allow him to join a lawsuit about the House subpoena power over White House witnesses in the impeachment probe. Mulvaney wrote he fears the House could hold him in contempt, while he obeys executive branch orders.

He claims that he cannot choose between complying with the House subpoena he received and the White House’s instruction that he is immune from testifying, and would like a federal court to decide for him.

Mulvaney’s move in court adds him to the ongoing case of another uncooperative impeachment witness, former deputy national security adviser Charles Kupperman, who sued House members and the White House before his scheduled testimony, asking a court to resolve whether he should follow the White House’s orders that he is immune from testimony or the House’s subpoena. Kupperman’s case isn’t set to be resolved for weeks, if not until mid-December or later.

The questions Mulvaney raises with his proposed lawsuit Friday “are significant for the country generally and for Mr. Mulvaney personally,” his lawyers wrote in the late-night filing. “They go to the heart of our representative government and its promise to secure individual liberty by dividing the awesome power of government amongst itself.

“Mr. Mulvaney, like Mr. Kupperman, finds himself caught in that division, trapped between the commands of two of its co-equal branches — with one of those branches threatening him with contempt. He turns to this Court for aid.”

Mulvaney also notes he’s in an especially powerful and unique role within the White House, making protection of his interactions with the President even more necessary for the court to weigh.

“Both in his capacity as the Acting White House Chief of Staff and as the Director of the Office of Management and Budget, (Mulvaney) met with and advised President Trump directly on a frequent and regular basis and implemented President Trump’s plans,” his attorneys wrote.

Mulvaney confirmed during a White House press briefing last month that Trump froze nearly $400 million in US security aid to Ukraine partially to pressure the country into investigating Democrats. Hours later, he denied having said so.

Kupperman, whose lawsuit Mulvaney wants to join, is using the same defense lawyer as former national security adviser John Bolton, who did not appear for his scheduled testimony Thursday. While those two share an attorney, Mulvaney has a different lawyer.

Mulvaney’s approach Friday marks a growing effort by top White House officials to stonewall the House and test their legal arguments in court as the House nears public testimony from witnesses regarding impeaching the President.

Historically, the White House and Congress had often reached deals to resolve their standoffs without the court’s intervention. In recent cases related to the House impeachment inquiry, federal judges have repeatedly sided with the House, saying it should get what it has asked for. But executive branch proponents are still attempting to keep some matters, like those involved in national security, confidential even in congressional investigations.

The federal judge in Kupperman’s case has discussed how Bolton could take the same approach in court, which would delay his own testimony. The House Intelligence Committee did not issue a subpoena to Bolton after his attorney threatened to go to court to fight if it was issued, an official on the panel said.

MJ in '11: No Dream Team for me if Isiah picked

Sports Gerald Ravindran - May 26, 2020
0
Old audio of Michael Jordan has surfaced in which he says he told NBA executive Rod Thorn, who was part of the USA Basketball...