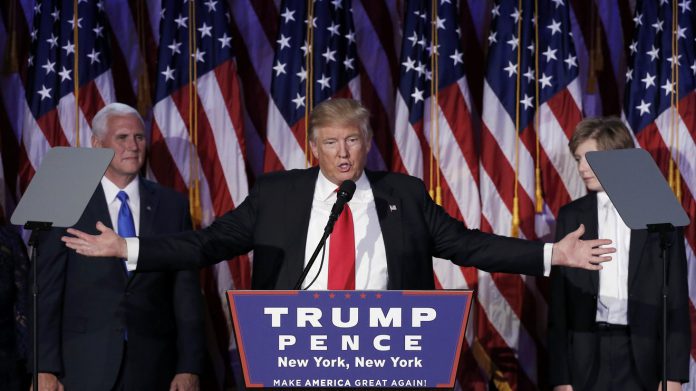 So much for Boots, the psychic goat.

And all the other polls. Brexit tried to teach us about foregone conclusions, but the market is the student at the back of the class, throwing spitwads and doodling. And so here we are, with a losing day ahead for Wall Street, and panic buying of gold and the Japanese yen.

“Near term, of course, we know what to expect market-wise, both from polls and looking at the screens,” says blogger Macro Man, surveying the chaos.

“The Brexit sterling precedent may be a useful one: a huge move the day of the shock, another large move the following day, and then sideways for a week before a final downward thrust,” he adds.

Still, a funny thing happened as Donald Trump, soon to be 44th president of the U.S. made his calm, no-rhetoric victory speech tonight. Some calm has set in, and while there’s still lots of red, S&P 500 futures have walked back a bloody limit-down 5% plunge. For investors still weeping into their pant suit sleeves, here’s some life-goes-on advice from Reformed Broker’s Josh Brown:

Yes, the market will get used to the new regime, simply because there is no other way — though you can bet volatility will hang around for a while to come. That’s because financial markets need time to figure out Trump’s intentions. One thing: Some are already saying forget about that interest-rate hike in December for now.

For our call of the day, tips from Sean Darby, Jefferies’s chief equity strategist, who was in the war room with clients, mapping out the playbook.

For a recap of a historic night, check out MarketWatch’s election blog.

“We recommend to stay away from a panic rush into the U.S. dollar, as the Fed December rate increase odds fell to 50%,” says LGC’s Ipek Ozkardeskaya, in advice to clients this morning.

On a conference call with clients in the wee hours, Jefferies’s Darby laid out the silver linings for investors in Trump’s victory.

While U.S. stocks are in line for some pressure, they could get help from a battered dollar, as “around 35-40% of revenues come from overseas,” he said.

Also, he notes Trump has called for the U.S. corporate tax rate to be slashed. “Tax cuts get spent! The share of labor vs. capital is likely to grow, and this is good news for consumption,” Darby said.

If the new president goes truly interventionist on trade, then the materials sector is in for a win, he suggests. And health care stocks should get a boost, as fears over drug pricing fade. He also says Jeffries is now more bullish on transports, on better economic prospects.

On the stability front, Darby said a Trump victory won’t derail the Fed from raising rates in December.

Remember yesterday’s call from James Juliano of the Reading the World blog (h/t Real Clear Politics)? He said the prosperity awaits with a Trump victory and a chance for stocks to rally 30%.

Here’s a look at the CBOE Volatility index VIX, +8.54%  , otherwise known as Wall Street’s fear gauge. It shot up to over 20 as the election results rolled in.

But we’re still not at Armageddon. It hit around 80 at the height of the financial crisis. And check out where it was during the China-inspired meltdown of August 2015, right over 50.

6 in 10 — That’s how many voters have an unfavorable view of Trump, according to exit polls conducted by NBC News.

The official percentages: 54% have an unfavorable view of defeated Democratic candidate Hillary Clinton, and 61% of Trump.

“What has been totally underestimated by those of us in the so-called press establishment and the people who have been looking at this is the depth of the anger, the depth of the people saying, ‘I want a change. I don’t care if I have to pull a pin on a grenade and roll it across the country, whatever it takes, we want change and we want big change.’” — That’s former NBC news anchor Tom Brokaw on Meet the Press, talking about how the media walked into this election with blinders on.

Trump made sure to say he will honor those “forgotten men and women” in his victory speech.

GoPro GPRO, +2.07%  said it’s recalling all the Karma drones it has sold in the two or so weeks they’ve been available to buy.

A reading on wholesale inventories is coming at 10 a.m. Eastern.

Where did Trump’s campaign begin? Back in 2011, when he got roasted by President Obama

Need to Know starts early and is updated until the opening bell, but sign up here to get it delivered once to your email box. Be sure to check the Need to Know item. The emailed version will be sent out at about 7:30 a.m. Eastern.

Bannon seeks to delay contempt of Congress trial until October

UConn's Bueckers out 6-8 weeks with fracture

Sports Gerald Ravindran - December 7, 2021
0
UConn sophomore women's basketball player Paige Bueckers will be sidelined six to eight weeks with a fracture in her left knee that she suffered...

Politics Gerald Ravindran - December 7, 2021
0
It comes as the US is experiencing rising cases -- the highest case count since September -- with nearly 60,000 people currently hospitalized in...

Trump's blood oxygen levels were at a 'dangerously low level' during 2020 Covid-19 diagnosis,...

Sports Gerald Ravindran - December 7, 2021
0
8:49 AM ETNick ParkinsonClose•Reports on boxing for ESPN.co.uk, as well as several national newspapers•Has been reporting on British boxing for over 15 years•Appears on...