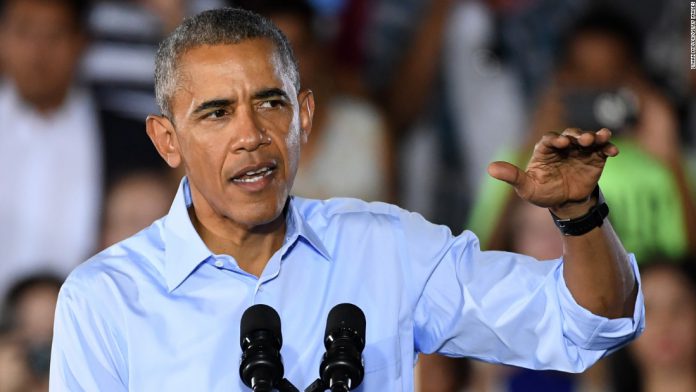 Obama, while speaking to a crowd of mostly students at the University of Central Florida, did not mention the FBI probe but instead made the case for why he believes Clinton is the only choice for president.

“She doesn’t just talk the talk she walks the walk. She’s got plans and she’s got details. And she’s read them through and she’s thought them through,” Obama told the crowd.

“Which is why when she’s in a debate with the other guy, she’s actually talking about stuff that she knows something about. And the other guy is just making stuff up.”

Obama acknowledged that Clinton may not always be “flashy,” but told the mostly young audience that was she lacks in “sound bites” she makes up for with the work she does.

This was Obama’s second time in about a week in the swing state. The President will return to the Sunshine State again next week in a final campaign blitz that has him campaigning also in North Carolina and Ohio.

While in Florida, Obama also spoke about the highly contested Senate race between incumbent Sen. Marco Rubio and Democratic Rep. Patrick Murphy, whom Obama has endorsed.

Obama slammed Rubio for sticking by Trump, saying, “If you run for office on family values, then you should’ve been walking away from a nominee months ago who was calling women pigs or dogs or slobs or grading them not on the content of their character, but on a scale of one to 10. You can’t, with a straight face, say you respect women and then support somebody who brags about assaulting women.”