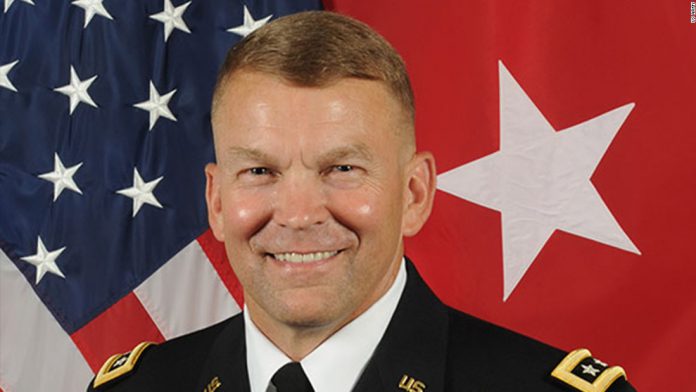 A three-star star general and the Commander of US Army North (5th Army), Buchanan is expected to arrive in Puerto Rico Thursday as the military will focus on trying to improve distribution networks of relief supplies.

Puerto Rico’s devastated infrastructure and a shortage of truck drivers is making it difficult to move aid where it is needed most — evident by the more than 9,500 containers of relief supplies currently stranded on Puerto Rico’s main port of San Juan.

On Thursday, the White House authorized a 10-day waiver of the Jones Act, a federal law that limits shipping to US ports by foreign vessels. Puerto Rico’s governor and other US officials had argued that a waiver would expedite supplies to the island.

But shipping companies already have aid and supplies either waiting at the port to be delivered — or held up at ports on the US mainland.

Sen. Marco Rubio called on Thursday for the Department of Defense to take over short-term relief and recovery efforts for the hurricane-ravaged island.

“Only the DOD, in my view, has the capacity to take charge of that,” the Florida Republican said in an interview on CNN’s “Inside Politics.”

Rubio, who visited the island Monday, said the most pressing concern for Puerto Rico was not just funneling aid to the island but establishing a logistical authority for the supply chain and recovery efforts. He said he believed the military was best positioned for such a challenge.

“The only people who can restore it, who have the capacity to do so quickly in the short term, and then turn it over to the authorities there in Puerto Rico, is the Department of Defense,” Rubio said.

He said moving materials around and taking action with so many different agencies and levels of government involved could require signoff from several entities, and that the tasks were too much for the government of Puerto Rico alone to handle.

“We need someone in charge of that with the know-how of logistics, with the capability to restore logistics and with the authority to make decisions quickly without having to check with 18 agencies,” Rubio said.

Buchanan will assume responsibility of the US military’s growing role with relief efforts as the Pentagon has already deployed a wide variety of assets to the region.

On Tuesday, the military said it is planning to deploy the USNS Comfort hospital ship to assist with FEMA’s response efforts.

The Comfort is a seagoing medical treatment facility “capable of providing resuscitation and stabilization care; initial wound and basic surgery; and postoperative treatment,” according to the US Navy.

Puerto Rican officials asked for additional medical assistance from the ship after initially indicating that they wanted to focus on getting power restored to damaged hospitals on shore, US officials told CNN.

The US Air Force is also sending additional aircraft to Puerto Rico and the Virgin Islands to ramp up the volume of daily relief missions.

Speaking on Capitol Hill Tuesday, Chairman of the Joint Chiefs Gen. Joseph Dunford said the priority is making sure airfields can operate.

“All the other support they need can’t come in until we get the ports and airfields open, so that’s why Northern Command has placed that at the top of the list in terms of the support we’re providing,” he said.

In India, Trump aims for crowds and strategic friendship

Sports Gerald Ravindran - February 23, 2020
0
Yoenis Cespedes broke his silence with the media Sunday, saying he didn't want to talk about the past and is hoping to be ready...