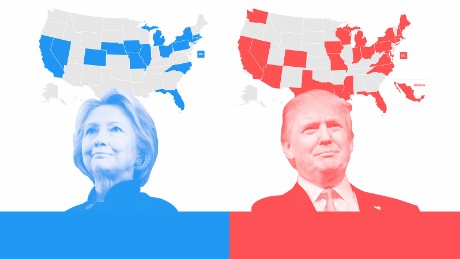 The Republican presidential nominee has 44% support of voters while his Democratic rival is at 42%, within the poll’s margin of sampling error. Libertarian candidate Gary Johnson stands at 8% and the state’s “none of these candidates” option received 3% of support.

“The race in Nevada is still tight, but the momentum has swung toward Trump,” said Patrick Murray, director of the independent Monmouth University Polling Institute.

The poll was conducted September 11 through 13 in the days after Clinton’s recent pneumonia diagnosis was made public.

Trump has the support of 88% of self-identified Republicans while 90% of Democrats back Clinton. But independents in the state overwhelmingly support Trump over Clinton — 43% to 29%.

Clinton is significantly ahead of Trump with non-white voters, 63% to 28%, but Trump continues to carry most white voters, 51% to 33%.

Clinton takes half of the female vote, beating Trump, who has 40%. But Trump is ahead of Clinton with men and has 48% of the male vote to Clinton’s 34%.

“These demographic shifts are within the margin of error for these demographic groups, but they suggest that Trump has had a little more success solidifying his base in Nevada than Clinton has,” Murray said.

The Monmouth University poll was conducted by telephone with 406 Nevada residents that are likely to vote in November. The survey has a sample margin of error of plus or minus 4.9 percentage points.

'I have never seen him eat a vegetable:' Trump braces for a beef-free menu in India

Politics Gerald Ravindran - February 23, 2020
0
"Our government is promising so much to so many and at the same time we let the government control the value of our money...