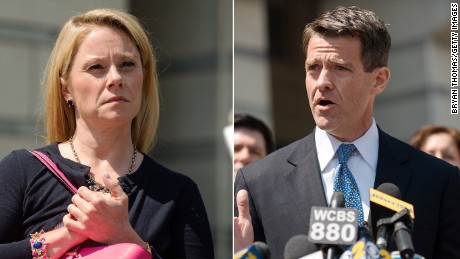 Bill Baroni, the former New Jersey Port Authority deputy executive director, is charged with fraud and conspiracy in connection to the closures and ensuing scandal that has come to be known as Bridgegate.

The controversy that preceded the trial of two Christie aides permanently dented the political career of the New Jersey governor, though it never led to charges for Christie. He unsuccessfully ran for president and now serves as the transition chief to Republican presidential nominee Donald Trump.

Baroni testified Monday that David Wildstein, a former Port Authority executive and admitted mastermind of the incident, told him from the beginning that the lane closures on the Fort Lee, New Jersey, side were for a legitimate traffic study, and that this was Baroni’s impression going into the week of the closures.

Baroni claimed he was originally told the September 2013 lane closures were a legitimate traffic study.

His testimony and cross-examination concluded Wednesday. Christie’s former deputy chief of staff, Bridget Kelly, is also on trial and has yet to take the stand.

Baroni testified that the conversation about traffic problems he had with Christie and Wildstein at Ground Zero on September 11, 2013, was led by Wildstein.

This was day three of the closures, and at this point Baroni thought the traffic was part of a study, he testified in federal court in Newark.

Wildstein and Christie’s discussion included whether or not more traffic could move across the bridge, which would have allowed Christie to announce that he had fixed the problem at the bridge, Baroni testified.

The conversation was not about political retribution, punishment or endorsements, Baroni testified.

Federal prosecutors pulled up a photo of the three men laughing at Ground Zero and asked Baroni if they were laughing about the lane closures.

“Absolutely not,” Baroni said to the jury.

Wildstein previously testified that Baroni led this conversation and that it centered around the traffic and Fort Lee Mayor Mark Sokolich not receiving phone calls back from the Port Authority despite his numerous pleas for help.

Much of the controversy focuses on the claim that the lane closures were meant to punish Sokolich for not endorsing Christie’s 2013 re-election bid.

Christie has repeatedly denied any wrongdoing or involvement, and he has never been charged with any crime related to the handling of the incident.

On the first morning of the lane closures, September 9, 2013, Baroni testified that he was instructed by Wildstein to remain silent towards Sokolich.

“Radio silence,” Wildstein told Baroni in an email, in spite of a message Sokolich left Baroni earlier that morning expressing concern for an “urgent matter of public safety.”

Baroni wanted to call the mayor back, but when Baroni got in touch with Wildstein, Wildstein said if Baroni spoke to Sokolich, Baroni might end up ruining the study, or “wimp out” because Baroni and Sokolich were close.

Wildstein told Baroni that he would “handle it” and that the study was too important to the governor’s office. Baroni believed him, according to Baroni’s testimony.

Baroni received more texts and voicemails from Sokolich as the week progressed, and Baroni felt frustrated because he wanted to reach out to Sokolich, according to his testimony.

On September 12, 2013, Baroni received a letter from Sokolich saying Sokolich felt there may be “punitive overtones” to the lane closures. Baroni testified that he went to Wildstein and asked if there was any truth to the accusation.

“David, tell me right now, is this true?” Baroni asked.

Wildstein looked Baroni in the eye and replied, “Absolutely not,” according to Baroni’s testimony, and Baroni believed him.

On September 13, 2013, Port Authority Executive Director Pat Foye emailed Baroni and several others expressing anger about what was happening at the bridge. Foye also ordered the lanes be reopened on September 13. Foye has previously testified that he knew nothing about the lane issue until late in the week.

Baroni forwarded Foye’s email to Wildstein who then got former Port Authority chairman and Christie ally, David Samson, involved. Samson did not have a good relationship with Foye, and Samson ordered Baroni to ask Foye to close the lanes again, according to Baroni’s testimony. Foye refused.

Baroni testified that he became seriously concerned that what he had understood to be a New Jersey traffic situation was now rising to the executive director and senior staffers in Christie’s office.

In response to several questions from his attorneys and federal prosecutors, Baroni testified he believed what Wildstein told him — that this was a traffic study and that Wildstein would take care of it — and that to this day he regrets not calling Sokolich.

Wildstein also said he considered Baroni one of his closest friends. Baroni said this week that this was not the case.

“I don’t define a friend as someone who would lie to me over and over and over,” he said, a comment that was objected to by prosecutors in court.