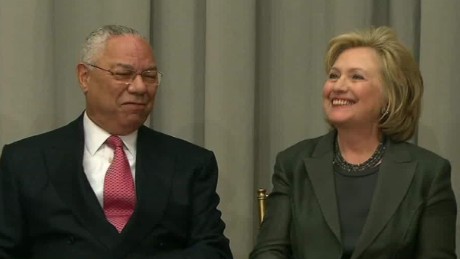 In a hacked email exchange with his successor Condoleezza Rice, the December 2015 correspondence, first reported by BuzzFeed News, revealed that Rice agreed with Powell’s assessment.

“Benghazi is a stupid witch hunt,” Powell wrote. “Basic fault falls on a courageous ambassador who (thought) Libyans now love me and I am ok in this very vulnerable place.”

But Powell noted that “blame also rests on his leaders and supports back here. Pat Kennedy, Intel community, DS and yes HRC.”

Kennedy is the under secretary of state for management at the State Department.

“HRC” refers to Hillary Rodham Clinton, the Democratic presidential nominee who served as secretary of state at the time of the attack in Benghazi, which resulted in the death of Stevens and three other Americans.

Rice, who succeeded Powell as secretary of state under George W. Bush in 2005, responded, “Completely agree.”

“Let me know when you’re in town and we’ll have that glass of wine (or two),” she added.

Powell’s emails were posted to DCleaks, a website known to share hacked documents associated with high-profile figures, and first reported by BuzzFeed and The Intercept.

In another message not to an aide, Powell denounced Donald Trump as a “national disgrace and an international pariah.”

An aide to Powell confirmed the accuracy of the emails to CNN but offered no further comment.

Rice’s chief of staff, Georgia Godfrey, said in an email to CNN, “I would characterize the exchange as two long-time friends rehashing current events like we all do. They aren’t in government anymore so this was a conversation between friends, nothing more.”