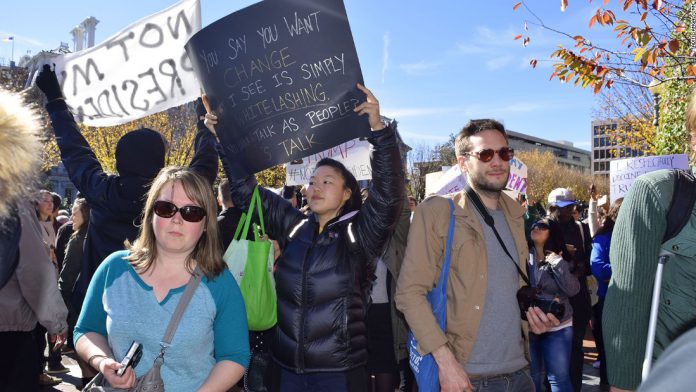 Scores of protesters gathered outside the building to demonstrate against Trump’s victory.

“I had to show him that one person can make a difference. Even if it’s 500 bucks or 15 hours on a bus,” Emerald said.

Protests have spread across the country after Trump was elected, with large crowds rallying in cities like New York City, San Francisco and Seattle the past two nights.

Garry Sitarski said outside the White House that he was afraid of a Trump presidency. He was protesting in New York on Wednesday and he came to protest in front of the White House in time for Trump’s visit.

Some of those present voiced support for Trump, including Zack Parente, 31, and Cletus Pippin, 29.

The importance of change was what moved Pippin to vote for Trump, his first ballot cast in a presidential election, though he said he didn’t agree with everything the president-elect said and hopes “he simmers down a little bit.”

He doesn’t think Trump is serious about building a wall that Mexicans will pay for.

“I think we’re going to end up paying for it,” he said.

Pippin’s mother, Brenda, was with him and said she was annoyed at the surrounding protesters, who she said must accept the outcome.

“You know, take it day by day, accept he is president, and stand behind him,” she said, adding that she was not offended by Trump’s infamous comments surfaced on the “Access Hollywood” tape last month.

Some protesters, however, cited the tape as to why they were there Thursday.

Deborah Klaus, a 48-year-old nurse from Arlington, Virginia, was telling her fellow protesters that she’s concerned for her daughter.

“I can’t let her think it’s OK. It’s not healthy,” said Klaus, referring to the sexual assault claims against Trump.

Trump announces end of US relationship with World Health Organization

Sports Gerald Ravindran - May 30, 2020
0
2The Premier League is considering staging up to six fixtures at neutral venues -- including Liverpool's potentially title-winning game at Everton next month --...

Sports Gerald Ravindran - May 29, 2020
0
With the NHL announcing its plans to return this summer, we caught up with Carolina Hurricanes coach Rod Brind'Amour to see how he's approaching...

Sports Gerald Ravindran - May 29, 2020
0
3:44 PM ETBrady HendersonESPN The Seattle Seahawks are counting on some of their younger defensive linemen to improve what was one of the NFL's...