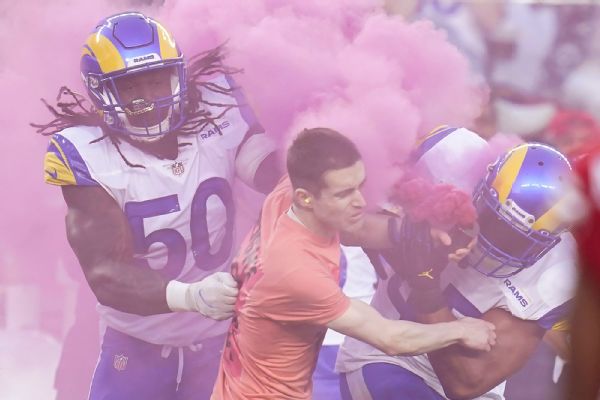 SANTA CLARA, Calif. — The Los Angeles Rams defense may have struggled to tackle San Francisco 49ers wide receiver Deebo Samuel on his touchdown run in the first half Monday night, but linebackers Bobby Wagner and Takkarist McKinley combined for the hit of the night later in the quarter.

Shortly before halftime, a fan ran across the Levi’s Stadium field with what appeared to be a device letting out pink smoke.

The person evaded security, then headed toward the Rams’ sideline. McKinley came toward the person, then Wagner stepped in and laid out the fan with a big hit.

Bobby Wagner stopped the fan who ran onto the field 😳

The collision left a noticeable mark on the field near the 40-yard line.

A fan also ran onto the field with a device letting out pink smoke earlier in Monday night’s game but was stopped by security.