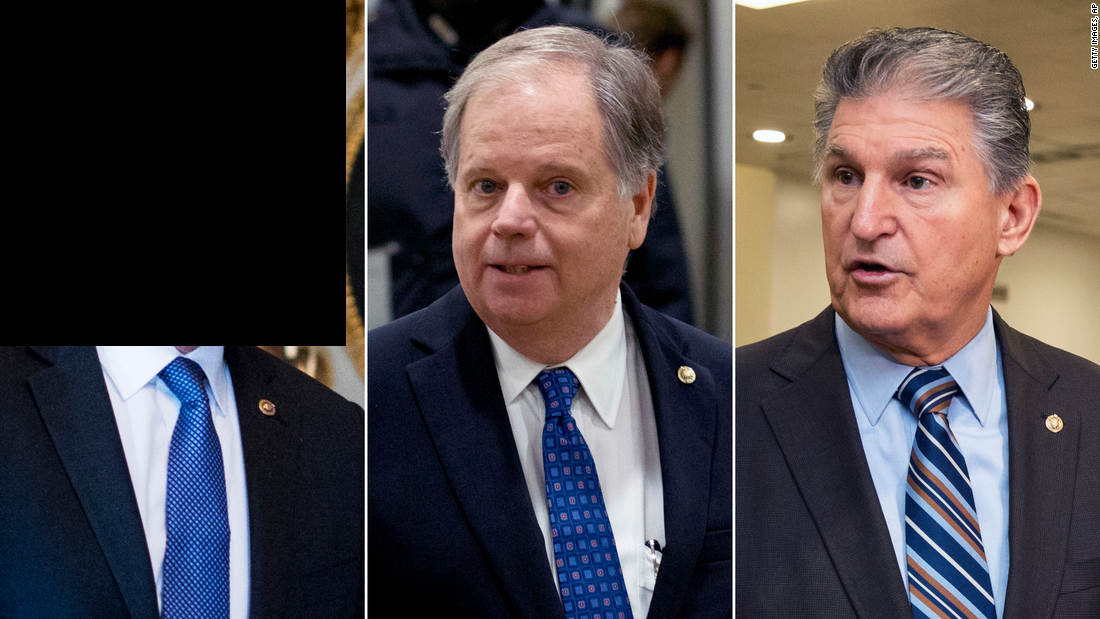 Several key Democrats, including Sens. Joe Manchin of West Virginia and Doug Jones of Alabama, have left open the possibility that they might acquit Trump on either of the two charges — abuse of power and obstruction of Congress. Moreover, Democrats are looking closely at Sen. Kyrsten Sinema, a freshman from Arizona, who has refused to repeatedly to discuss her thinking during the trial.

It still remains to be seen whether Trump faces bipartisan support for his conviction, with GOP senators like Mitt Romney, Lisa Murkowski and Susan Collins all staying mum about their intentions. But for some red state Democrats, they face equally challenging calculations, hailing from constituencies where Trump is more popular even as their base voters believe Trump’s conduct with Ukraine is worthy of his removal from office.

After the first two days of the defense team’s arguments, Manchin praised the President’s attorneys, telling CNN after both sessions that they did a “good job” of making their case, saying they are “making me think about things.”

While the senators say they are still undecided, there is an expectation inside the Capitol that perhaps one or more of these Democrats could defect, potentially even splitting their votes, voting to convict on abuse of power and acquit on obstruction of Congress. That’s similar to the split votes cast by freshman Democratic Rep. Jared Golden of Maine over the articles of impeachment in the House.

In a video released on Tuesday, Jones indicated that he was more comfortable with the first article of impeachment — abuse of power — rather than the second — obstruction of Congress.

“I’m anxious to hear how the House managers are going to respond to some of the issues that were raised by the President’s lawyers when it comes to Article II,” Jones said.

Senate Minority Leader Chuck Schumer suggested that he wouldn’t whip his colleagues on the ultimate vote on whether to convict the President — but he indicated the caucus is united in its demand to hear from witnesses, including from former national security adviser John Bolton.

“Everyone is going to make their own decisions,” Schumer told CNN when asked if he would push his caucus to vote the party-line on conviction. “But we have great unity in our caucus.”

As the impeachment trial shifts to a new phase Wednesday, when senators get to question both sides, these undecided Democrats say that the answers from the prosecution and defense will prove crucial in determining their votes.

Another senator up for reelection in a state Trump carried — Gary Peters of Michigan — said he will wait until the questions are done before making a decision on how to vote.

“It’s not the opening presentations that tend to be the most significant,” Peters said. “It tends to be the questions and how they’re how they’re answered.”

For Republicans up for reelection, the calculus is also tricky: They must avoid angering Trump supporters in their states while also reaching out to more moderate voters who may believe the President abused his office in pushing for Ukraine to investigate his political rivals.

Collins and other Republicans like Sens. Cory Gardner of Colorado and Martha McSally of Arizona all face tough bids in the fall and difficult choices ahead. Republican Sen. Thom Tillis of North Carolina, who also will be targeted by Democrats, told CNN he’s ready to acquit Trump, while McSally has shown no signs she’s prepared to defect.

Others are more cautious.

“I’m going to continue to be impartial, and I take that very seriously,” Gardner said Tuesday.

But for Democrats to take back control of the Senate, they’ll have to flip at least three seats, and win the White House, while protecting Peters and Jones. In 2016, Trump barely won Michigan but swept Alabama by more than 27 points.

Republican groups are already trying to turn impeachment into an issue that will help them flip the House and retain the Senate. America First Policies, a pro-Trump Super PAC, has aired anti-impeachment ads against Jones and began pressuring Peters with an ad in the Grand Rapids media market on Tuesday morning.

Peters said that the calls into his office are “fairly evenly split” on impeachment and has not yet made up his mind.

Asked about her views, Sinema would not answer questions, with an aide referring a question to her office. A Sinema spokesperson did not respond to a request for comment.

Before the ultimate vote, Jones, Manchin and the other red state Democrats are pushing to hear from new first-hand witnesses who have not testified, including Bolton and acting White House chief of staff Mick Mulvaney.

“They are talking with their constituents, many of whom support President Trump, trying to hear from every witness and review all the documents before they decide how they will vote,” said Jonathan Kott, a former Manchin senior adviser, of the red state Democrats.

In the past few days, the potential revelations described in Bolton’s manuscript have jolted these Democrats.

While listening to the defense arguments Tuesday afternoon, Manchin battled the urge to sleep — until he heard the name Bolton. It was a week into an impeachment trial that frequently went late into the night and Trump’s personal lawyer Jay Sekulow had name-checked FISA warrants, the Steele dossier and Peter Strzok, drifting away from the people and matters at the heart of the Ukraine scandal.

But then Sekulow mentioned Bolton, who claims in a forthcoming book that he has first-hand evidence of Trump’s decision to withhold nearly $400 million in aid to war-torn Ukraine in order to pressure its leader to announce an investigation smearing his political rival, former Vice President Joe Biden. Sekulow argued that even if Bolton’s allegations were true, they don’t describe impeachable conduct, and read statements from the Trump administration denying their validity.

Manchin sat up straighter, put back on his reading glasses and wrote something down.

Still, Manchin has yet to say how he’ll vote.

“I really think that the 16 hours of questions will be very enlightening,” Manchin told CNN.

CNN’s Jeremy Herb and David Wright contributed to this report.

Is it safe for travelers to visit Italy?