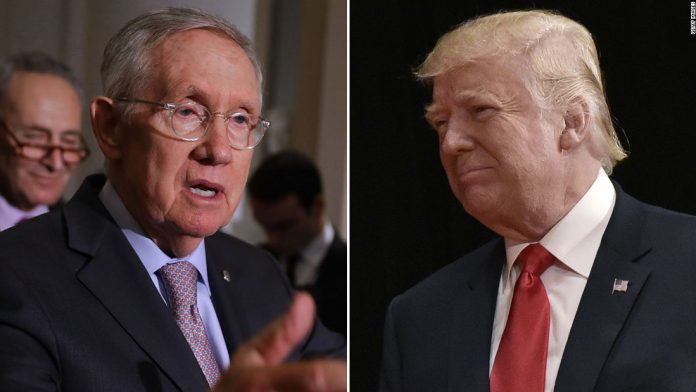 Reid, the provocative, retiring Nevada senator who has enjoyed lobbing allegations and insults toward Trump, told CNN’s Manu Raju that he believed all of the complaints lodged by nearly a dozen women despite Trump’s denials. Reid described the women as often physically “trapped” and said “that’s a crime,” before backing off that term when pressed.

“I don’t know about a crime. But it is a kind of sickness,” he said Tuesday, dismissing Trump’s denials. “How could you buy it?”

In the wake of the publication of a 2005 tape in which Trump describes sexually aggressive behavior toward women, about 10 women have come forward with allegations of sexual assault or unwanted sexual contact. Before the women came forward, Trump had said he had never acted the way he bragged about doing in the tape. CNN has not independently verified any of the women’s claims.

Reid also pushed back on Trump’s insistence in recent days that the November elections are “rigged” against him and his supporters. He admonished Trump for pushing what he called a “make-believe” narrative about widespread election fraud.

“I’ve always felt that everything we can get people to do to vote, we should do it,” Reid said. “He is obviously in a different school than I am. He wants people not to vote.”

Reid voiced displeasure with his Republican counterparts for not more vociferously defending the American election system from Trump’s attacks. He said he was “not happy” with House Speaker Paul Ryan, who issued a statement implicitly criticizing Trump for his language, but reserved his more extensive criticism for the Senate GOP leader.

“(Ryan) has at least spoken out. He’s been not really forceful but he has at least said something,” Reid said. “Mitch McConnell has not done anything. I’m really fairly disappointed and that’s an understatement.”

Reid also said he was “terribly disappointed” in John McCain, and said Senate Democrats would spend “any money that we can” in Florida’s Senate race, where party leadership has cut much of its planned advertising for Democratic Rep. Patrick Murphy.