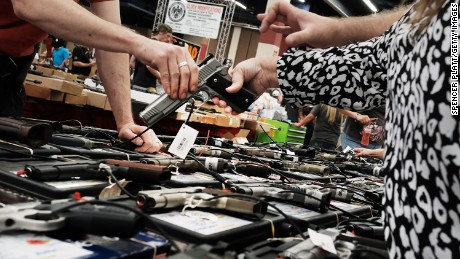 The issue became the subject of investigation after the FBI said the alleged shooter charged in the 2015 mass shooting at a South Carolina church should not have been able to buy a firearm. The FBI failed to complete the background check in the three days required by law, allowing the alleged shooter to buy the gun.

While the FBI runs background checks, the Bureau of Alcohol Tobacco Firearms and Explosives is responsible for retrieving guns from buyers who weren’t legally permitted to purchase them.

But for the past 15 years, the FBI and ATF have disagreed over what is a “fugitive from justice,” which would disqualify a prospective buyer from legally obtaining a firearm, the inspector general report said. There were nearly 50,000 such purchases between 1999 and 2015 that the FBI sought to deny, but that the ATF didn’t agree required the agency to try to retrieve the gun.

The Justice Department’s Office of Legal Counsel tried to referee the dispute in 2008, but the FBI asked Justice lawyers to reconsider. Six years later, there hasn’t been a decision.

Despite the Obama administration’s push to more tightly enforce crimes associated with illegal gun sales, the federal prosecutors are doing fewer prosecutions of people who obtain firearms as a result of lapses in the gun background check system, the inspector general report said.

Between 2008-2015, ATF referred to prosecutors the cases of 558 gun buyers who were later determined to not be legally permitted to buy firearms. Prosecutors accepted 254 of those cases, the report found.

Justice Department officials told the inspector general that in the wake of the 2012 Sandy Hook shooting, President Barack Obama issued orders for prosecutors to prioritize cases against traffickers and violent offenders.

State authorities, which also conduct some background checks, routinely fail to update the federal databases used to conduct the checks, according to a sample of gun transactions, the inspector general report said.