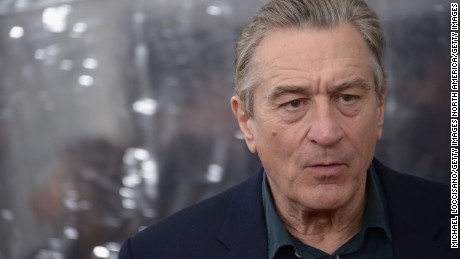 “It makes me so angry that this country has gotten to this point that this fool, this bozo, has wound up where he has,” said the 73-year-old who won a best actor Oscar for his role as boxer Jake LaMotta in 1980’s “Raging Bull.” “He talks about how he’d like to punch people in the face? Well, I’d like to punch him in the face.”

De Niro recorded the video for the #VoteYourFuture initiative to encourage Americans to vote in the presidential election. But producers deemed the video so partisan that they excluded the De Niro section on Trump from the video and released it separately.

The video began attracting attention when it aired Friday on “The Kelly File,” the Fox News show hosted by Megyn Kelly, who has been on the receiving end of Trump attacks in the past.

The video was recorded before news broke Friday that Trump had used vulgar language to describe his attempt to sleep with a married woman and how his fame allows him to have his way with women.

In the video, De Niro called Trump several names, employing some that the GOP nominee has used to describe people he doesn’t respect like “pig” and “dog.”

“He’s so blatantly stupid. He’s a punk, he’s a dog, he’s a pig, he’s a con, he’s a bulls— artist, a mutt who doesn’t know what he’s talking about,” said the actor, known for iconic roles in “The Godfather II,” “Goodfellas” and scores of other films in a four-decade career.

He “thinks he’s gaming society, doesn’t pay his taxes. He’s an idiot. Colin Powell said it best: He’s a national disaster. He’s an embarrassment to this country,” he said.