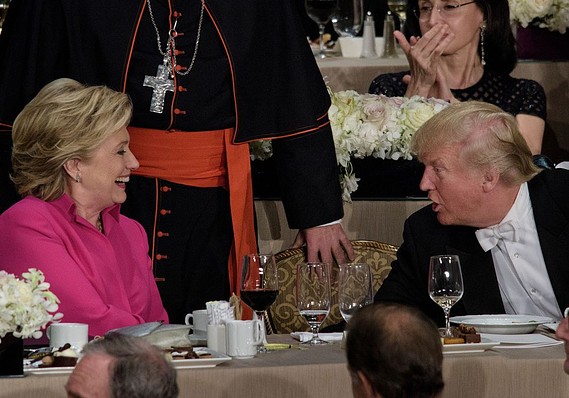 Should Hillary Clinton be elected president on Nov. 8, one thing seems certain.

By way of background, Social Security’s 12.4% payroll tax applies to a worker’s first $118,500 of wage income (it will be $127,200 next year), and benefits are calculated based on that income, according to this blog post by the Committee for a Responsible Federal Budget (CRFB). Taxpayers pay 6.2% of their earnings up to the cap to Social Security and employers pay the other 6.2%.)

The “taxable maximum” is indexed to wage growth and currently covers about 83% of all wages, according to the CRFB. Or put another way, 17% of total wages are not subject to the Social Security payroll tax.

Now experts have long debated how best for fix Social Security and most of those plans focus on raising taxes, especially for those whose income exceed the payroll tax cap, lowering benefits or doing a little bit of both. There are, of course, other plans, one of which happens to be that endorsed by Donald Trump. That’s the “grow-the-economy” plan. We’ll talk more about that later.

For the moment, however, the plan most likely to be on the table come 2017 – given current polls and projections by FiveThirtyEight, RealClearPolitics and others – is Clinton’s raise-taxes plan.

And the question of the day is this: Will it fix Social Security?

Well, according to the CRFB, increasing or eliminating income subject to the Social Security tax would improve the program’s finances. It would close more than two-thirds of Social Security’s solvency gap.

But the fix isn’t enough to solve the entire problem – particularly on a structural basis, according to the CRFB’s blog. To fix the structural gap, policymakers would also need to reduce the size of benefits which would be paid out as a result of this new higher income being subject to the tax.

“In the most extreme case, if policymakers severed the link between contributions above the current taxable maximum and benefits altogether, eliminating the taxable maximum could close over 85% of the program’s solvency gap and over 55% of its structural gap,” the CRFB wrote.

Whose solvency baseline do you use?

When evaluating the effect raising the taxable maximum would have on Social Security’s solvency, Andrew Biggs, a resident scholar at the American Enterprise Institute, said one other issue needs to be addressed: Whose solvency baseline do you use?

“There are several different estimates of the Social Security shortfall and the most common estimate – from Social Security’s trustees – is the smallest of the three,” said Biggs. “The Trustees project a 75-year shortfall of 2.6% of payroll, which means that an immediate 2.6 percentage point increase in the 12.4% tax rate would keep the system solvent for 75 years (though not beyond). The recent technical panel appointed by the Social Security Advisory Board recommended a 3.4% shortfall, while the Congressional Budget Office (CBO) projects a 4.4% of payroll deficit. So, it’s a wide range.”

What’s more, Biggs said eliminating the payroll tax ceiling would cause a significant decline in other federal tax revenues, particularly income taxes and Medicare taxes, and state income tax revenues would fall as well. “The reason is that when payroll taxes are raised on employers, they will generally lower employee wages to cover their increased costs,” he said. “Economic theory and research find this to be true, and both the CBO and the Social Security Administration assume this will happen. So, the wage base for high earners will shrink a little bit, and this means lower income/Medicare taxes will be received since there’s fewer wages to tax.”

One might think the effects would be small, except these are the people who get hit with the highest tax rates, said Biggs. “Purely based on this effect, which isn’t very controversial, I estimate that federal income/Medicare taxes and state income tax revenues would fall by about 26 cents for each dollar of revenues raised by eliminating the tax max,” he said. “And that’s true even if we assume that individual earners don’t respond at all to higher tax rates, which isn’t very likely. Smaller increases in the tax max – say, to make Social Security cover 90% of total earnings, as it did in the early 1980s – would add some revenues, but not nearly enough to get close to solvency.”

To be fair, some argue that eliminating the payroll tax cap fixes the solvency gap and leaves some money left over to improve benefits for those who need it most. “Forecasts vary but eliminating the max would likely be enough to achieve 100% solvency and have some left over to expand the minimum benefit to eliminate a significant portion of the elderly living in poverty,” said Teresa Ghilarducci, an economics professor at The New School for Social Research.

As for the Trump’s plan, here’s what the CFRB had to say:

“Faster economic growth would be great for Social Security, just as it would for the broader federal budget and for individual wages and income. But the level of growth needed to make Social Security solvent over the next 75 years is unachievable, and even if it could be achieved it would defer the program’s shortfalls rather than solve them.

“To achieve 75-year solvency, real growth rates would likely need to average about 4% per year over the next 75 years – roughly double what is currently projected… (and) such levels of economic growth are not achievable given the current aging of the population. Even 3.5% economic growth – which is what the Trump campaign has claimed it can achieve – would require levels of productivity growth not achieved for any 10-year period in modern history, let alone for any 75-year period.”

There might be a better way. The Bipartisan Policy Center’s (BPC) Commission on Retirement Security and Personal Savings, recently published a report – after two years of deliberation – that recommends ways to strengthen Social Security finances. Increasing income subject to the Social Security tax is one of the recommendations. But there are others.

Specifically, Brigitte Madrian, a professor at the Harvard Kennedy School, said the following would specifically address the solvency of the Social Security system are:

The commission specifically recommended gradually raising both the full retirement age (FRA) and the maximum benefit age. Starting in 2022, both these thresholds would rise by one month every two years. The gradual increases would continue for 48 years until the full retirement age reaches 69 and the maximum benefit age reaches 72 (in 2070). The commission recommends keeping the early retirement age at 62. And the net effect of this change means that workers who retire at FRA spend roughly the same proportion of their adult life in retirement as they do today.

Use a more accurate measure of inflation to index benefits, namely the Chained CPI (C-CPI-U).

According to the BPC’s commission and as noted above, the fraction of earnings subject to the Social Security payroll tax has declined from 90% in 1983 to 83% in 2013 because incomes of the highest earners have grown faster than inflation in the intervening time. Social Security’s chief actuary estimates that the new taxable maximum would cover approximately 85.6% of total national earnings in 2020.

Gradually increase the payroll tax rate by 1% in total over the next 10 years (by 0.1% each year, split across employees and employers).

Thus, the total would increase from 12.4% to 13.4% (after 10 years) up to the MTE. Currently, workers and their employers each owe Social Security payroll taxes on 6.2% of all wages — 5.3% for Old-Age and Survivors Insurance (OASI) and 0.9% for Disability Insurance (DI) — for a grand total (combining the employer and employee contributions) of 12.4%, up to the taxable maximum.

Those who are most vulnerable (low-income lifetime earners, widows and widowers) would see modest benefit increases, while the highest benefit recipients would see reductions, but less than the benefit reduction that will occur if the system is not reformed before 2034 when the Social Security trust fund runs out.

According to Madrian, the BPC’s commission recommendations were evaluated by the actuaries at the Social Security Administration and by the Urban institute. “The proposed reforms put the Social Security system in a position of sustainable solvency for the long-term,” she said. “The money coming into the system through tax revenue would equal the money paid out in benefits to beneficiaries in the long-run.”

See section 6 of the BPC report for more detail, which notes the following:

“Relying exclusively on high-income individuals for additional revenue, however, would require either paying additional benefits to those who do not need them or further weakening the relationship between program contributions and benefits. Raising revenue through a modest payroll-tax-rate increase would mitigate this concern, protect middle-class Americans from abrupt changes to benefits, and help finance the substantial benefit increases that low-income individuals would receive under our proposals. The added revenue also enables the package to achieve a roughly even mix of revenue increases and benefit adjustments.”

So, what’s a lawmaker to do? Well, it seems that neither candidate’s single-tactic plan – Clinton’s tax-the-rich plan or Trump’s grow-the-economy plan – is going to fix Social Security’s long-term solvency problems. Rather, it’s going to take a suite of tactics as outlined by the BPC’s commission.

Now we just need politicians willing to take this on instead of kicking it down the road for our children and grandchildren to fix. For those who want to leave the world a little better than they found it, focusing on real fixes for Social Security is a good place to start.

Robert Powell is editor of  Retirement Weekly , published by MarketWatch. Get a 30-day free trial to Retirement Weekly . Follow Bob’s tweets at RJPIII . Got questions about retirement? Get answers.  Send Bob an email here.

Canadian police believe the remains of 2 indigenous women who were victims of a serial killer are likely in a landfill, but will not...

As China moves away from zero-Covid, health experts warn of dark days ahead