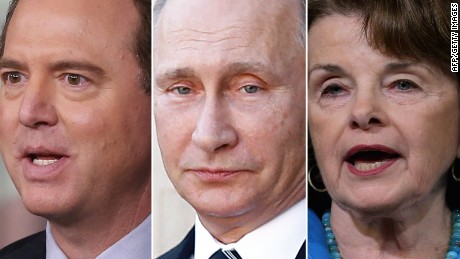 “Based on briefings we have received, we have concluded that the Russian intelligence agencies are making a serious and concerted effort to influence the US election,” the Democrats said. “At the least, this effort is intended to sow doubt about the security of our election and may well be intended to influence the outcomes of the election — we can see no other rationale for the behavior of the Russians.”

Unlike past hedged comments from US lawmakers and officials, the statement was definitive and more forceful than any previous assertions about Russian hacking from top-level government sources. And in tying the hacking directly to Putin and/or senior levels of Russian government, the Democrats were more forceful than the administration or Congress has been in the past.

“We believe that orders for the Russian intelligence agencies to conduct such actions could come only from very senior levels of the Russian government,” Schiff and Feinstein said. “We call on President Putin to immediately order a halt to this activity. Americans will not stand for any foreign government trying to influence our election. We hope all Americans will stand together and reject the Russian effort.”

Experts have pinpointed Russian government-affiliated hackers as the source of cyberattacks on a number of Democratic political groups, including the Democratic National Committee and Democratic Congressional Campaign Committee.

Communications and documents stolen in those hacks have been selectively leaked online since, by a hacker claiming to be unaffiliated with the Russians going by “Guccifer 2.0.” But analysis by private-sector cybersecurity firms have concluded that the character is most likely a front for the Russians to cast doubt on their culpability.

Two other hacks — both of state election boards — have also been loosely tied to potential Russian hackers. In Illinois, thousands of voter role records were accessed, and Arizona was also targeted. Though nothing was done to influence elections in those states, experts believe Russian hacking is designed to cast doubt in the security and validity of the election.

Schiff and Feinstein did not explain what in their briefings led to their conclusion. Intelligence Committee members receive classified briefings they can’t speak about in public.

They also broke with the administration in their condemnation of Russia. The White House has referred to the beliefs of experts on the hacks, but have not discussed any conclusions drawn by US government investigators. The administration has also been navigating a tense relationship with Russia over the conflict in Syria, with both sides pointing fingers over a fraught ceasefire agreement.”

No Republicans joined their statement. The hacks have been perceived as a benefit to GOP nominee Donald Trump over Democrat Hillary Clinton. Trump has spoken favorably of Putin in the past, and Democrats have tried to paint him as friendly to the authoritarian leader.

The hacks have been damaging to the Democratic Party, leading to the resignation of then-Chairwoman Debbie Wasserman-Schultz on the eve of the Democratic convention in July. In return, Democrats have asked Republicans to not use material from the hacks due to the suspect Russian involvement.

Analysis: The Sanders effect will touch every race on the 2020 ballot

After spectacle, Trump and Modi turn to business

Sports Gerald Ravindran - February 25, 2020
0
LAS VEGAS -- It is a ritual that plays out before virtually every fight of consequence: Each boxer is asked about his plan for...

Sports Gerald Ravindran - February 25, 2020
0
Bradley Beal became the first player since Kobe Bryant to score 50 points on back-to-back nights when he dropped a career-high 55 in the...